Mathematics is the basic & standard subject that shows the impact on our daily life tasks. Since childhood parents and teachers help students to understand the basic concepts of maths thoroughly. One of the fundamentals of Mathematics is Math Tables. If students at primary school read and memorize the multiplication tables from 0 to 25 can aid in solving the long mathematical calculations.

Here, we have covered 23 Times Table necessary information such as tips to memorize the table of 23, how to read and write multiplication table of twenty-three, etc. View this article thoroughly and do calculations quickly by using the 23 times multiplication chart.

Table of Twenty-Three Chart is given in image format in order to help the students in remembering the math tables quickly. Reading & Remembering the 23x Times Table is quite tricky and necessary to answer the long multiplication and division mathematical sums with speed and accuracy. So, make use of this multiplication chart of 23 available here and do mental calculations for saving time in annual or competitive exams. Download the printable 23 times table multiplication chart for free of cost and learn well. 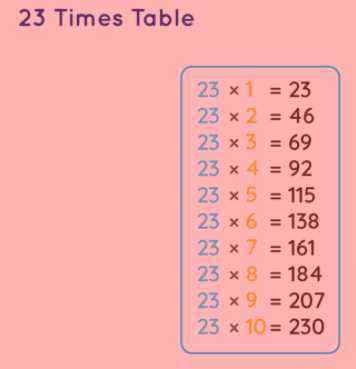 How to Write Multiplication Table of 23?

Tips to Remember Table of 23

The simplest trick that helps students to learn the 23 times table is given below. Check out the points listed here and solve long math problems quickly by following the tips & tricks of the 23 multiplication table.

First, we have to write down the given statement 5 plus 23 times 9 minus 3 mathematically.

Then, use the table of 23 and solve the expression