In daily life, we use the table of 24 in many ways like for estimating working hours, use as 24 carats of gold, 24 major and minor keys in Western tonal music, 24 hours of a day, etc. So, you can solve real-life problems quickly whenever you are out of the classroom by using the Multiplication Table of Twenty-Four. Also, 24 is the smallest number having absolutely eight divisors. However, you can also improve your Problem-solving skills and do mental maths right in your head by remembering the 24 times table multiplication chart along with other Math Tables.

Ensure to use the 24 times table chart given over here as a quick reference and recite the table effortlessly. This helps you to solve your long multiplication and divisions quickly by performing mental maths in mind. Remembering the Twenty-four Table can be a great savior while your quizzes or competitive exams. So, visit this page regularly to read the 24’s table by viewing the multiplication chart or download the Multiplication chart of twenty-four in image format to prepare at any time and anywhere. 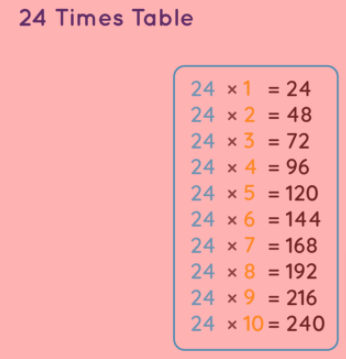 Learn Writing Multiplication Table of Twenty-Four up to 20

Learning Multiplication Table of 24 is pretty much essential for solving long multiplication, division, and arithmetic problems. By using the twenty-four multiplication table, you can easily understand & calculate the 24 times table-related questions in daily life, For fast calculations, mastering the math tables adds an extra advantage in your annual or competitive exams. Go through the below table of 24 and learn the first 20 multiples of twenty-four.

How to Read 24 Times Table in Words?

Learn reading the twenty-four table in words by taking the help of the below stuff. Try to recite it orally in order to memorize it for a long period of time.

Hints & Tips to Memorize Table of 24

Aspirants are suggested to check out the below tips and hints to learn and memorize the 24 Times Table for a lifetime. They are as follows: 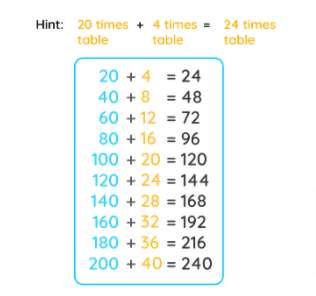 Solved Examples on Multiplication Table of 24

2. It took 24 hours to create a bed for a carpenter. Can you help the carpenter to calculate the time for making 4 such beds applying a 24 times table?

Time took by Carpenter to create one bed = 24 hours