On this page, you can get the free printable worksheets that are useful to learn numeric numbers in words and how to write the numbers from 1 to 10.

How to Write Number Two? | Hand Writing of Number 2

At the starting stage children feel difficult to learn and remember the numbers. So if you give them the numerical numbers in picture form, children can learn easily and identify the numbers fastly. Number 2 means double or we have 2 things or objects. Generally, numbers are used to count objects or things. Suppose an example, When we have 2 biscuits means, the quantity of biscuits is two. So, it is very important for every kid to learn the numeric numbers as soon as possible in an easy method.

The below figure shows the number two representation in object forms as well as how to write number two, 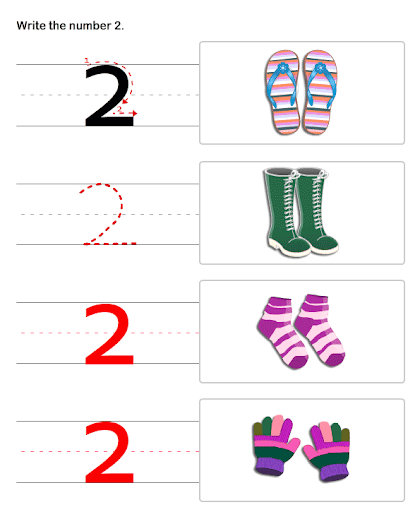 Writing Two in Numbers | Trace and Learn How to Write Two in Word?

Writing the word multiple times is known as Tracing. After practicing tracing, children can write the number two in a numeric way and number two in words on their own. Below tracing figures are on number two both in numeric and word form, so that your children will get habituated easily. Also, this worksheet on the number two helps kids to have more practice. For beginners, who is yet to practice with a pencil this worksheet will be more useful and can be the best way. In tracing we give dotted lines which helps the children to memorize as well as improve their handwriting.

Parents, teachers, students can download this Worksheet on Numbers Two for free of cost. In this worksheet, we can see two shoes, two chappels, two hand gloves, and so on the number two represented on dotted lines. Preschool students are advised to write the number two on the dotted lines so that they can learn the process of writing and can recognize the number easily.