Parents and students can download this number four worksheet and take a printout of the worksheet for more practicing purposes. Thus, Kids can easily practice how to write the number four in words and numeric ways. It also helps to make their handwriting neat. Every student is supposed to identify and able to write the numbers up to 100 at least by completing their nursery. By doing so, Kids can easily do basic arithmetic operations like addition and subtraction. Below is the figure on how to write the number four, in that figure four ships are represented in numeric form and word form using a dotted line. 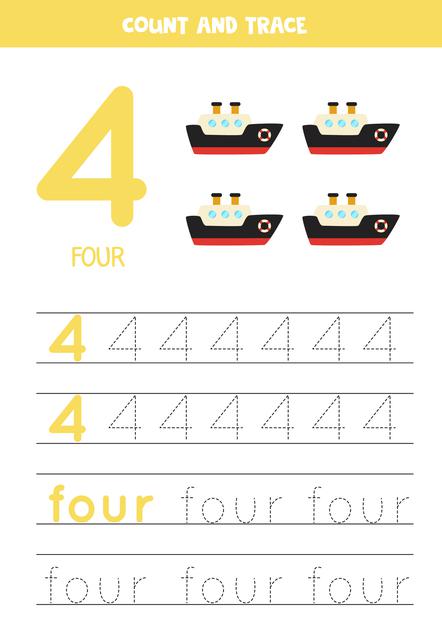 Here, you can find detailed information on how to trace and write the number 4. Nursery students and preschooling kids can see four ships beside the number four. Doing such activities helps them get acquainted with counting as well from the early stages. They are advised to write that number on the dotted lines.

Teach your child the basics of mathematics easily with this Worksheet of number four. These number worksheets are helpful to guess and learn the tricks of writing quickly. This will also help to improve your handwriting by requesting them to write the number within the specified space between the lines. So, practice the NumberFfour Worksheet any time anywhere as many times as possible, and encourage the students to learn to write the number four on their own. Multiple times writing is called Tracing.

Learning numbers is useful for each and every student while in nursery or kindergarten. Check out those benefits in the following sections.

Get to know the interesting facts about numerical number four is given in below.