In this article, we learn about how to write the number eight in numeric format, the number eight in words using the dotted line method, Benefits of learning number eight. All these things will be learned without charge of cost and you’ll be able to download them and start your practice quickly.

Students must learn numbers from 1 to 100 as early as possible because without having any knowledge of numeric numbers we will not do any problems in mathematics. The number that comes before 8 is 7 and after 8 is 9. It is advised to learn the numbers in order so that it will be easy for the students to remember them. Kids who are practicing this worksheet can improve their numerical skills and know the importance of numbers. You see the below figure, in that figure three stars are representing the numerical number three. Better to write down the numbers, and practice the numbers with a pencil. 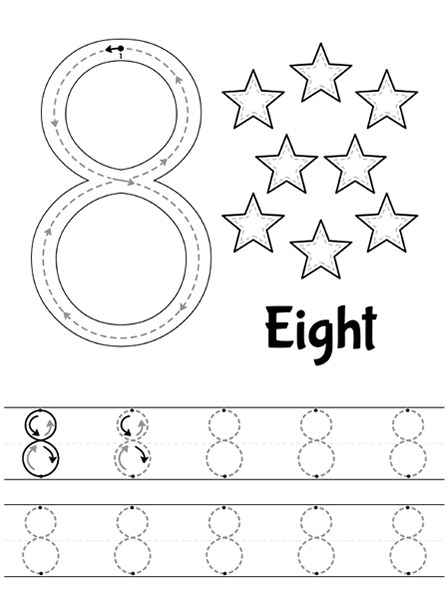 Parents and teachers who are looking for the Worksheet on Number eight for teaching numbers to their child can read this page. Children can improve their handwriting and know the importance of numbers by practicing the worksheet. Guide the students to follow the instructions and rewrite the number eight. They are advised to put in writing down that number on the dotted lines so that they skills to write that number easily.

Students have to trace the number eight symbol several times on the worksheet to know how to write it. You can take a print of this Worksheet on Number eight and practice it. This worksheet makes the preschooler’s or homeschooling handwriting is perfect and neat. So, practice this worksheet as many times as possible. After practicing this number 8 worksheet, kids trace the number on their own. Multiple times of writing is named as Tracing.

Benefits of Learning the Number Eight

The below mentioned are the benefits of learning the number eight.

Amazing Facts about the Number Eight