In this article, we learn how to write number five, trace and learn of number five, the advantages of learning number five, and numbers from 1 to 10 worksheets also available in this section. 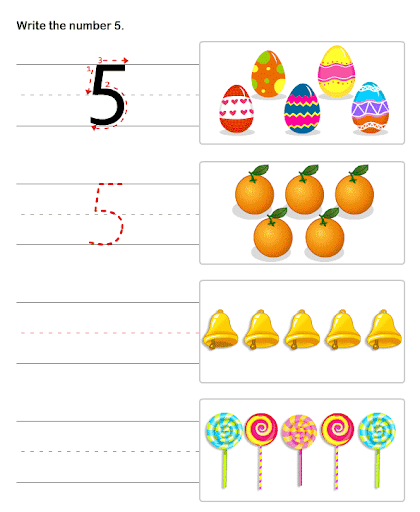 The above consists of five bells, five eggs, five Lollipops, and five oranges in that figure first two are filled, and the remaining two are blank only, so we can that two for your kid’s practice purpose. It is a decent thing if your child gets accustomed to practicing on the worksheet with a pencil. The above-mentioned three lines on the worksheet will help to enhance their handwriting skills. Parents and teachers guide the students to follow the instructions and rewrite the number five.

How to Number 5 in Words? | Trace and Learn to Write Number Five

Assist the students and kids to practice number five as many times as possible for a quick understanding of the topic. Many of the children don’t prefer to write while they’re playing. At that point, you need to show this handy Worksheet on number 5 and teach them the way to write the quantity joyfully. So that time kids will never feel they are learning something forcefully. So, parents and teachers try to engage your kid in learning numbers with the assistance of our free Number 5 Preschool worksheet.

We must be writing the number five in words with kids in between the above three spacing lines then we have good handwriting. Learning of five is very important and it has an important role in mathematics.

Interesting Facts to Learn about Number 5

The important facts about learning of number 5 are mentioned in the below section.