In this article, we are discussing the topic of Addition. As we all know mathematics is a subject that deals primarily with numbers. In maths, basic arithmetic operations are addition, subtraction, multiplication, and division. These operations apply to all real numbers. The addition operation of mathematics helps us to find the sum or total of something. This plays an important role in our daily existence while dealing with different kinds of transactions.

On this page, we will learn the meaning of addition, addition on the number, example images of addition, practice problems, and so on. Use this page for free of cost, it helps to improve mathematics knowledge and fast calculation skills.

Meaning of Addition | How to Add the Numbers?

The Addition is the term used to add two or more numbers and the result of adding a number is a sum. It is denoted by using a symbol is ‘+’ (plus sign). For example, the addition of 2 and 5 can be written as 2 + 5 the sum or result of that adding numbers is 5. As many times as required, the plus sign (‘+’) will be used.

The addition of the list of numbers is termed as the sum is represented using the symbol ∑. The example image of addition is given below, 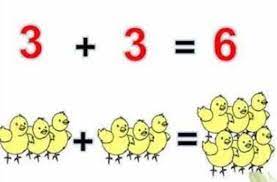 The above-given example image consists of 3 pets and 3 pets, in between ‘+’ symbol is there it means to perform addition perform. So, the sum of pets is 3 + 3= 6. Like that students will perform the addition operation. Another example image of addition is given below, 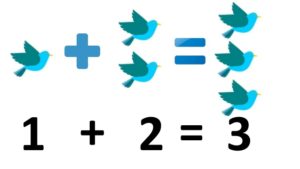 The figure consists of 1 bird and 2 birds, in between 1 and 2 the ‘+’ symbol is there. Now, we perform the addition operation of 1 and 2, the sum is 3. So, 3 birds are present on the resultant side. 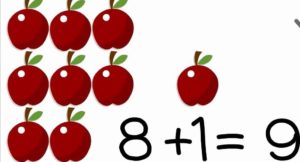 Solution:
Given figure is on addition
The figure consists of 8 apples and 1 apple, in between apples ‘+’ is there. It means to perform an addition operation.
The addition means adding the two given numbers.
So, add 1 to 8, then 8 + 1 = 9.
Therefore, the sum of the given figure value is 9. 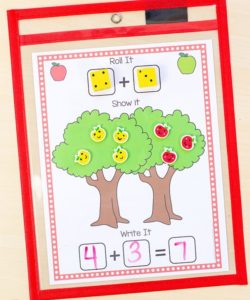 Solution:
Given, figure consists of roll dice, the tree with fruits.
Now, explain the given figure sum.
The rolled dice numbers are  4 and 3, that number of fruits is shown on the tree.
After that, write that rolled dice numbers in the box, the ‘+’ (plus sign) is there in between the numbers.
The ‘+’ means addition perform,
So, add 3 to 4 then the sum is
4 + 3 = 7.

Example 3:
Find the sum of the given figure images. The figure consists of balloons with different numbers. 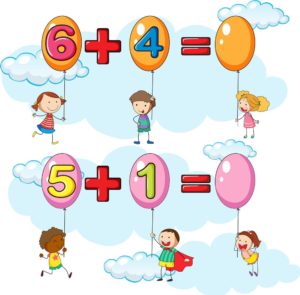 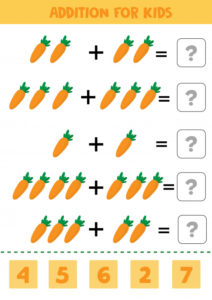 Question 2:
The given figure consists of different kinds of images. Students will count the image object numbers and add that numbers. Write the sum in the given boxes using a pencil. 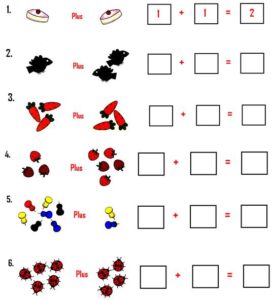 Question 3:
The below figure consists of different images and numbers. Students will count the numbers and add that numbers, the resultant sum is circled in the given numbers on images. 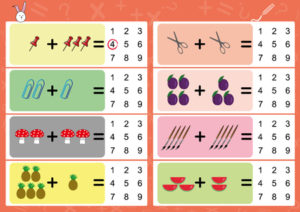 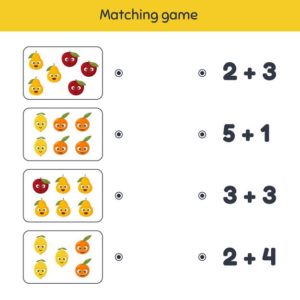 Question 5:
The below figure consists of different numbers with the ‘+’ (plus) sign and some value numbers. Students match the following, add the given plus signed numbers and then draw a line from added numbers to suitable given value numbers using a pencil. 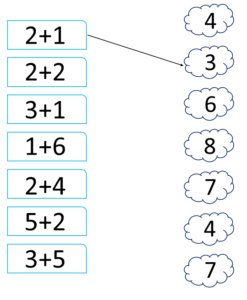