Are you worried to teach your students about months and days in the primary grades? If yes, you are on the exact page. This page gives you plenty of examples as a worksheet for the students to practice in different ways. These months and days worksheet helps the kids to learn and understand more about the topic on months and days at their young ages.

For preschool and primary kids, this Months and Days activity sheet is flawless and encourages them to learn more and memorize easily. As we knew that seven days makes one week and 4 weeks 2 days or 4 weeks 3 days makes one month, and twelve months makes one year. Here, this free printable worksheet on months and days involves many examples in different ways for students to benefit from quick learning.

Tracing Sheets on Months and Days

The following tracing worksheets on months and days will help the primary students know the spellings and pronunciation of the months and days. Also, students can grasp them easily into their minds. 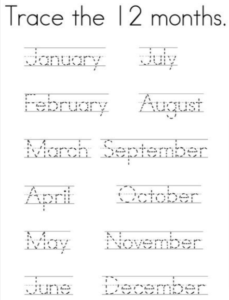 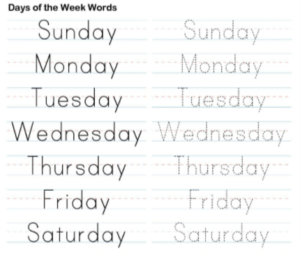 Days of the Week and Months of the Year Worksheets PDF

1. How many months and days are there in one year?

2. How many days in a week and their names?

3. How many days are there in each month?

7. Fill the below empty boxes with the correct month by the followed given months.