Ancient Romans used letters to write numbers even today the building date on monuments and public buildings are marked In Roman numerals and we also use roman numerals in clocks and watches. Go through the complete article to be well versed with details like Definition, Chart, Conversion from Roman Numerals to Numbers, Conversion of Numbers to Roman Numerals. Also, refer to Solved Examples for writing Roman Numerals and understand the concept well.

Below the letters used to write numbers

Here is the list of commonly used Roman Numerals for Numbers 1-1000. They are as such 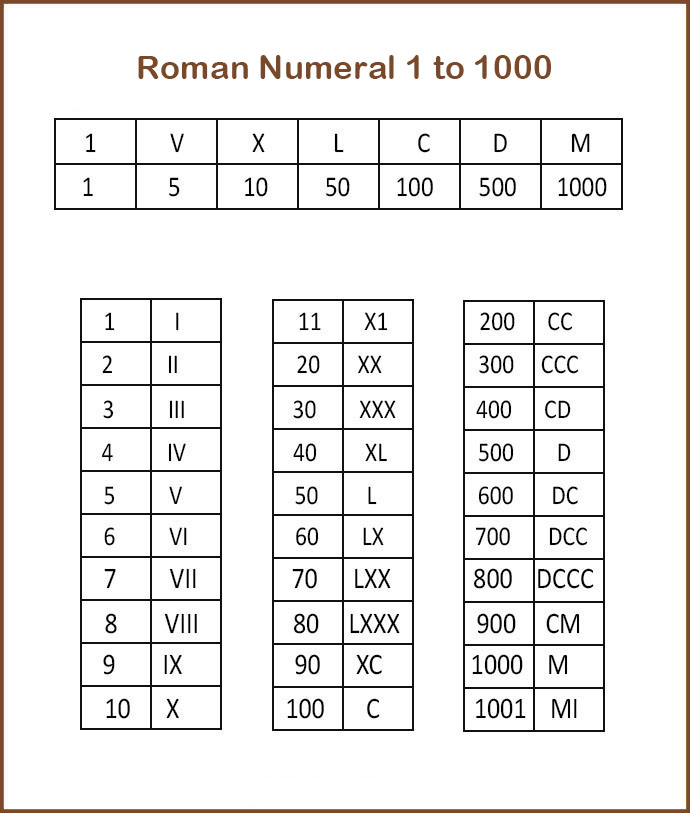 We need to remember three rules while writing roman numerals

Now let’s see what are these rules

Among all the roman numerals, few symbols I, X, C, and M can only be repeated three times at maximum. Example:

Among all the roman numerals few symbols V, L, and D should not be repeated. This means the symbols for 5, 50, and 500 can’t be repeated.

Explanation:
As stated we do not write the number 10 by repeating V but as X

Few roman numerals symbols V, L and D can’t be subtracted from any other numbers. Let me give one example for better understating

Roman numerals symbols I, X, and C are used to subtract from any other numbers. There are just six combinations that are usually followed while subtraction as mentioned below.

So these are the 3 rules that everyone should follow while writing roman numerals.