I Can identify whether a plane shape belongs in a category by the number of parallel sides, sides of equal length, and right angles. 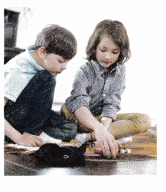 Show one way to sort the shapes by their attributes. 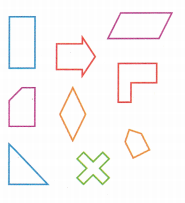 Answer:
First of all, need to know what is an attribute?
An attribute is a characteristic, or feature of an object.
We can sort by their shape, colour, size, and thickness.
Here in the objects, we can sort by the colour: 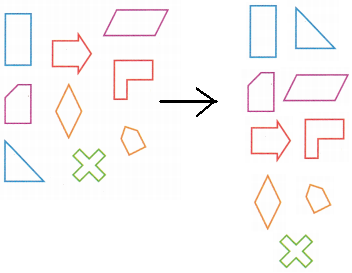 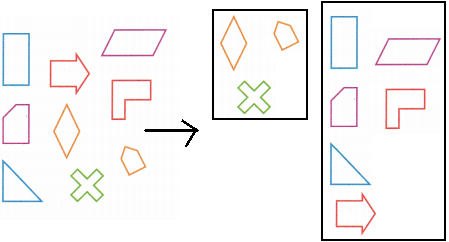 Question 1.
Louise and Paul use a Venn diagram to sort shapes. 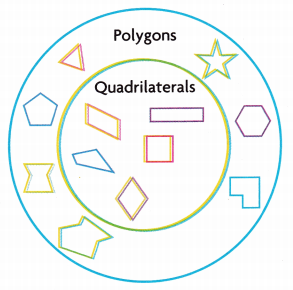 A. How are the polygons within the outer circle of the diagram related to one another?
Answer:
The polygons are similar when the corresponding angles are equal/congruent, and the corresponding sides are in the same proportion. These main things make one polygon similar to another polygon.

B. How are the quadrilaterals within the inner circle related to one another?
Answer:
There are many different types of quadrilaterals and they all share the similarity of having four sides, two diagonals and the sum of their interior angles is 360 degrees. They all have relationships with one another, but they are not exactly alike and have different properties.

D. Draw a shape into each circle of the diagram. Explain how your shapes belong in that circle.
Answer:
If I draw a square then it belongs to the outer circle and inner circle because the square has four sides, four corners, and they are made with straight lines. 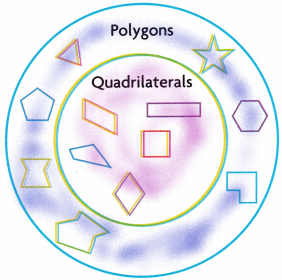 The circle cloured with blue are polygons is a plane figure that is described by a finite number of straight-line segments connected to form a closed polygonal chain.
The circled coloured with pink are quadrilaterals. It is a plane figure that has four sides or edges, and also has four corners or vertices. The angles are present at the four vertices or corners of the quadrilateral.

These are not quadrilaterals because quadrilaterals have four sides, four edges and four corners. A Quadrilateral is a polygon having a number of sides equal to four. That means a polygon is formed by enclosing four line segments such that they meet at each other at corners/vertices to make 4 angles. That’s why the above diagrams do not belong to the quadrilaterals circle.

Question 2.
Here is a group of plane shapes.

A. Which of the plane shapes are quadrilaterals? Write the letter of the shape.
Answer: A, B, G, H
Quadrilaterals are polygons. They are part of a plane enclosed by four sides (quad means four and lateral means side). All quadrilaterals have exactly four sides and four angles. They can be sorted into specific groups based on the lengths of their sides or measures of their angles.

B. Which of the plane shapes are polygons with all sides of equal length? Write the letter of the shape.
Answer: C, D, E, F
When all the five sides of the polygon are equal in length, then it is called regular pentagon otherwise irregular pentagon. Hexagons Another type of polygon is the hexagon which has 6 sides and 6 vertices. A regular hexagon will have equal 6 sides and all its interior and exterior angles also measure equals.

C. Use the Venn diagram to sort and compare the shapes. Label each circle of the diagram. Place the letter of each shape in the diagram. 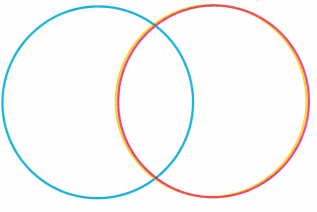 Answer:
A diagram used to represent all possible relations of different sets. A Venn diagram can be represented by any closed figure, whether it be a Circle or a Polygon (square, hexagon, etc.). But usually, we use circles to represent each set.
Polygons with sides of equal length.
A quadrilateral is a plane figure that has four sides or edges, and also has four corners or vertices. The angles are present at the four vertices or corners of the quadrilateral. 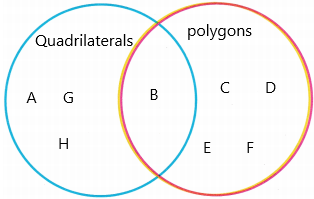 Question 2.
Place the letter of each shape in the correct place in the Venn diagram.

Question 3.
Place the letter of each shape in the correct place in the Venn diagram.

Question 4.
Open-Ended Choose two different quadrilaterals to compare. How are they the same? How are they different?
Answer:
For example, if we choose rectangle and parallelogram by these two quadrilaterals we can say how they are the same and different.
They are not having the same sides.
– According to the properties of rectangle and parallelogram, all sides are not the same.
– Moreover, opposite sides are equal
– Opposite sides are parallel
– Opposite angles are equal
– Sum of adjacent angles is 180
– They are bisected each other.
– One more same thing is that they do not bisect perpendicularly.
Now writing the differences:
– They are different in angles.
– In a rectangle all angles are equal but in a parallelogram, all angles are not equal.

I’m in a Learning Mindset

What strategy for categorizing plane shapes have I not yet tried?
Answer: