Question 1.
Draw lines to match the shape to the correct term.
Define a trapezoid as a quadrilateral that has exactly one pair of parallel sides. 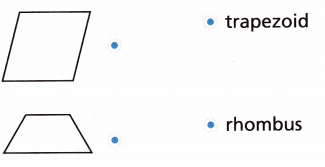 Question 2.
Draw a quadrilateral that is not a square.

Answer:
So I can draw rectangles, rhombus, parallelogram, trapezoid, etc.

Question 3.
Use Tools Draw a quadrilateral that has exactly 2 right angles. Tell what strategy or tool you will use to solve the problem and explain your choice.

Answer: A trapezoid can have two right angles.

1. Two parallel sides, the perpendicular height is equal to the shortest distance between the parallels.
2. right trapezium is equal to two parallel sides + 2 right angles.
3. Isosceles trapezium is equal to two parallel sides + 2 (non-parallel) sides with the same length.
I think the only strategy to solve this problem is to learn the properties of quadrilaterals and compare each other property then we can easily solve the problems.
Every quadrilateral has its own properties which make it identifiable and different from the rest. These properties give more insights into the geometrical construction of a shape. The properties of the trapezium are listed below:
– It is a 2D shape.
– The bases of a trapezium are parallel to each other.
– The length of both the diagonals is equal.
– The diagonals of a trapezium always intersect each other.
– The adjacent interior angles sum up to 180°.
– The sum of all the interior angles in a trapezium is always 360°

Question 4.
Select all the words that describe this shape.

We all know that rectangle is a quadrilateral and polygon because it is having four sides and four angles.
Now know, what is a rectangle?
A rectangle is a type of quadrilateral that has its parallel sides equal to each other and all four vertices are equal to 90 degrees. Hence, it is also called an equiangular quadrilateral.
Now know, how is the rectangle is a parallelogram?
Since, the opposite sides are equal and parallel, in a rectangle, therefore, it can also be termed as a parallelogram.
Properties of rectangle:
– It has four sides and four vertices
– Each vertex has an angle equal to 90 degrees
– The opposite sides are equal and parallel
– Diagonals bisect each other
– Perimeter is equal to twice the sum of its length and breadth
– The area is equal to the product of its length and breadth
– It’s a parallelogram with four right angles.
– Sum of all interior angles equal to 360 degrees

Question 5.
Select all the shapes that are polygons and have exactly one pair of sides of equal length. 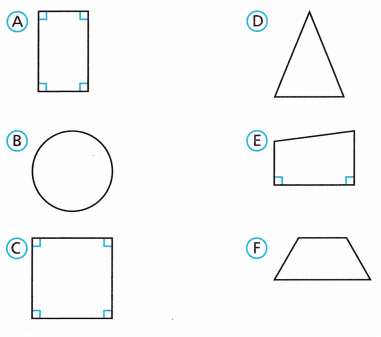 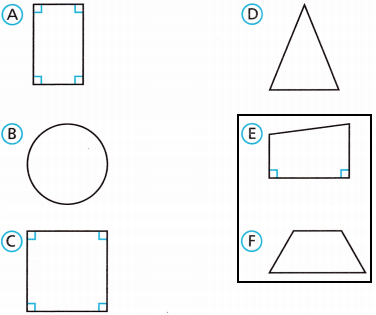 A Polygon is a closed figure made up of line segments (not curves) in a two-dimensional plane. Polygon is the combination of two words, i.e. poly (means many) and gon (means sides). A minimum of three line segments is required to connect end to end, to make a closed figure. Thus a polygon with a minimum of three sides is known as Triangle and it is also called 3-gon. An n-sided polygon is called n-gon.
– A trapezium has no sides which are parallel to each other. An isosceles trapezium has one pair of opposite sides which are parallel to one another and also their base angles are equal to one another.
– Isosceles trapezium is equal to two parallel sides + 2 (non-parallel) sides with the same length.

Question 6.
Select all the shapes that can be placed in the part of the diagram where the circles overlap. 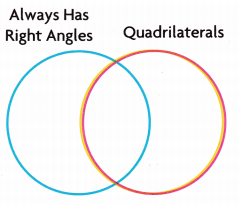 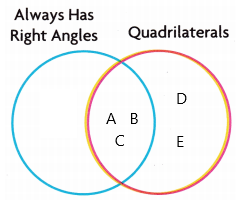