You know numbers are very important and commonly used in any circumstances. In numbers, we have different types of digits like 1-digit, 2-digit, 3-digit, etc. Now, let us know about 2-digit numbers along with the representation using Spike Abacus. There are 90 two-digit numbers that are from numbers 10 to 99.

Spike Abacus helps the children more easily to know about the concept and use of numbers. We use beads or disks to represent numeric values in the abacus. In Spike Abacus each place value is increased ten times than the previous one.

Two-digit numbers start from number 10 to 99. Numbers placed in the tens place and one’s place spikes are considered as 2-digit numbers. We use beads on the Spike Abacus base to place the place values of the given digits. Also, you can make use of this abacus tool for performing 2-digit mathematical calculations like addition, subtraction, multiplication, etc.

Below image is the representation of a given number with Spikes on the abacus: 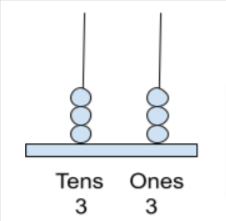 First, place the given number in their place values.

Here, take 2 beads in the tens place and 1 bead in one’s place.

Next, place the beads in Spikes as shown below: 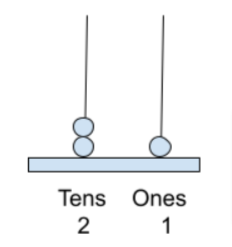 How to write the number 50 in Abacus?

Place the given number in place values of the spikes of the abacus.

Let us show the number 50 using spikes on Spike Abacus. 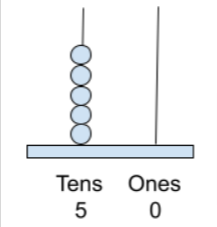