In this article, you can learn quickly about the Numbers Showing on Spike Abacus. You can do numbers math calculations fast with a spike abacus than normally. Showing Numbers on the Abacus benefits the children to know the numbers with their respective Place Values. Also, kids can grasp the concept of Finding out the Numbers using the Spike Abacus.

Spike abacus is a mathematical tool that might have balls with holes. Spike abacus had many iron spikes on a stiff base. You know that the abacus represents the no. of digits as spikes. The spikes are known by the places of the unit value of the digits as ones, tens, hundreds, thousands, ten thousand, etc. from right to left. Let’s discuss more information on Spike Abacus from the below modules.

What is Spike Abacus?

An Abacus is a manual tool used to perform mathematical functions like additions, subtraction, etc. by sliding counters along with rods or grooves. Spike Abacus means the no. of multi-digits where they are shown on the spikes of the abacus. The spikes from right to left shows the place value of the digits in increasing order.

On spike abacus, we can teach the children addition, subtraction, and some other math basic concepts easily. Additions, Subtractions are the main concepts where we use them throughout our lives. Children can learn the abacus playfully. The spike abacus is considered subject to explore more calculations for students and it will be interesting to learn more through spikes.

How to Represent Numbers in Abacus? | Representation of Numbers on Spike Abacus

The representation of Place Values in the Abacus is as follows.

With a help of an image, you can easily understand the places of the Numbers on Spike Abacus. 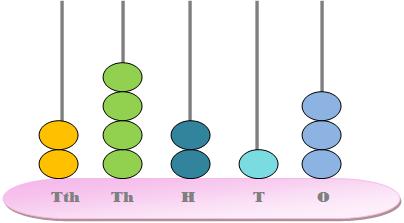 In the above figure, we can count the balls on the spike abacus from right to left and find the exact number i.e., the number is 14213.

How to do Addition and Subtraction of Numbers Using Spike Abacus?

Step 1 – If we take 2-digit numbers for addition, first we have to notice the place values of the given digits.

Step 3 – Now, add the balls on spikes in the tens place and one’s place then, you will get your addition number of given digits.

We have to notice the place value of the given digits.

Thus, the addition of given numbers is 34.

Let’s see this example with spike abacus base 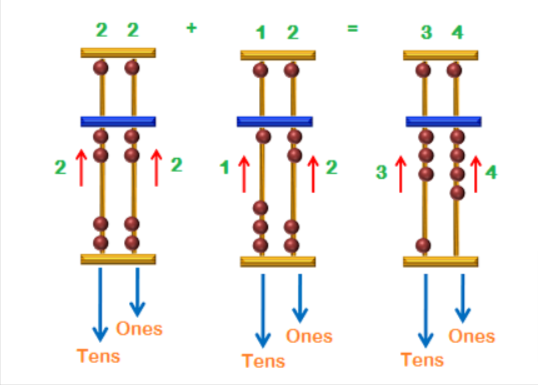 Step 1 – Subtraction is taking away from one number to the second number. If we take 3-digit numbers for subtraction.

Step 2 – First, we take away the balls on spikes from one number to the second number in one’s place and then similarly for tens place and for hundreds place.

We have to take away from one number to the second number with their respective place values.

Thus, the subtracted number is 111. 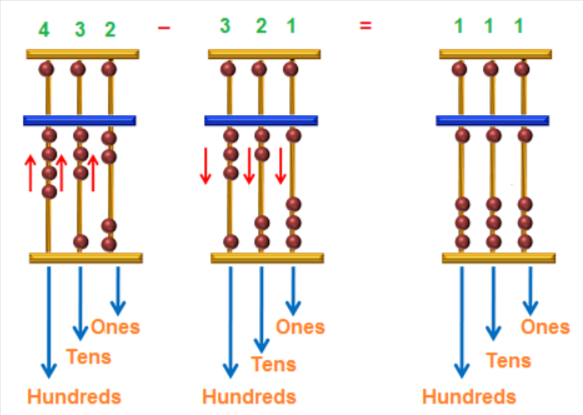 Reasons to Use Spike Abacus

FAQs on Numbers Showing on Abacus

1. What does Abacus mean?

An Abacus is a device that helps kids to calculate math calculations by using the beads that moved up and down on a sequence of sticks or spikes inside a wooden frame.

2. How to write a number in spike abacus?

In order to write a number in the spike abacus, first, check the place values of the given digits and use the required beads in the respective place values and then calculate the math functions using the abacus.