On this page, you will learn how to identify the sequence order, types of sequences, example questions on the sequence. An arithmetic sequence is a number in a particular order, the difference between two terms is constant. Sequence length is equal to the number of terms and it can be either infinite or finite.

A sequence is defined as any object or a set of numbers are arranged in a particular order followed by a rule. Each number within the sequence is named a term. If a1, a2, a3, a4,……… etc. will denote the terms of a sequence, then 1,2,3,4,…..denotes the position of the term in the sequence.

The most commonly used sequences are given below,

The formulas for finding Geometric sequence is,

Fibonacci Sequence: The Fibonacci sequence could be a set of numbers that starts with a one or a zero, followed by a 1, and proceeds supported on the rule that every number called a Fibonacci number is equal to the sum of the preceding two numbers.

Some basic formula of arithmetic sequence and geometric equence are given in the below tabular form:

Question 1:
The below figure consists of various shape patterns. Students will recognize the shapes and draw the next sequence shape in the given figure boxes using a pencil. 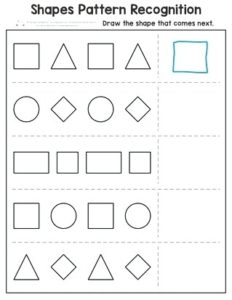 Question 2:
The below figure consists of various teddy bears with numbers and numbers in the boxes. Students will find the sequence and mark a tick on the next sequence number in the given figure. 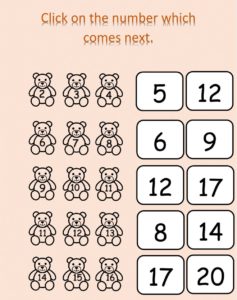 Question 3:
The given figure consists of various direction images but one box is blank. Students will observe the sequence and choose the correct direction image in the given options. Write it in that blank of the below figure. 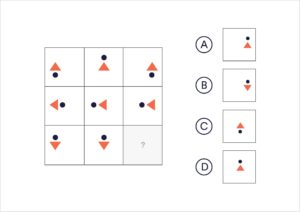 Question 4:
Find the next sequence numbers of the below figure. Students will write the finding number using a pencil. 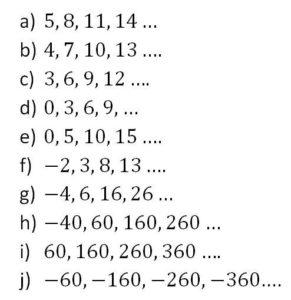 Question 5:
The below figure consists of different sequence numbers and some option numbers. Students will find the sequence number in place of the question mark. Write that number using a pencil. 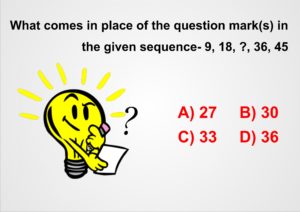