The pictorial representation uses images to represent data. Pictograph uses pictures and symbols to present information about the provided data. Pictographs are very comfortable to use, should be used very carefully but sometimes they may lead to misinterpretation of data as well because it doesn’t show the data accurately.

Whenever pictographs are drawn, they should look visually correct as most of the time the data is interpreted visually. In this article, we will also find the definition of pictograph, how to make a pictograph, its advantages with many solved examples.

Different pictorial representations of data are bar graphs, line graphs, pie charts, and so on are available to easily understand the data.

How to Make a Pictograph?

The steps required to make a pictograph are as follows 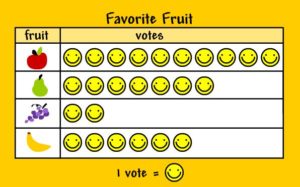 Advantages of the Pictographs

1. As Pictographs contain images it is very easy to understand.
2. A large amount of information can be expressed in a Simple way through pictographs.
3. Pictographs reduce the need for an explanation since it is used everywhere.
4. At one glance you can say what type of data by seeing the images in the pictograph.

1. What is a Pictograph?
The pictographs represent the data using images. In other words, pictographs use images or symbols that represent the frequency of the data
2. What do we use the key in the pictograph?
We use a key, which signifies the value of the image. Sometimes, if the frequency of the data is very high, then one image is not sufficient to represent the data. Thus, the numerical value called “key” is used and should be written along with the pictograph.
3. Write the steps required to make a pictograph?
1. The five steps involved in making pictographs are:
2. The first step is to collect the data
3. Select the image or symbol according to the data and
4. Assign a key.
5. Draw the pictograph and
6. Review the data.
4. What are the different pictorial representations of data?
The different pictorial representations of data are bar graphs, line graphs, pie charts, etc.