Complete the diagrams. Count by ones to label the number lines.

Exercise 1.
Plot your point on both number lines.
Answer:
Answers may vary.

Exercise 3.
Mark the opposite on both number lines.
Answer:
Answers may vary.

Exercise 4.
Choose a group representative to place the opposite number on the class number lines.
Answer:

Question 2.
Carlos uses a vertical number line to graph the points – 4, – 2, 3, and 4. He notices that – 4 is closer to zero than – 2. He is not sure about his diagram. Use what you know about a vertical number line to determine if Carlos made a mistake or not. Support your explanation with a number line diagram.
Answer:
Carlos made a mistake because – 4 is less than – 2, so it should be farther down the number line. Starting at zero, negative numbers decrease as we look farther below zero. So, – 2 lies before – 4 on a number line since – 2 is 2 units below zero and – 4 is 4 units below zero.

b. State a positive integer greater than Q. Label it T.
Answer:
Answers will vary. 11

d. State a negative integer less than R. Label it U.
Answer:
Answers will vary. 9

e. State an integer between R and Q. Label it V.
Answer:
Answers will vary. 2

Exploratory Challenge: Constructing the Number Line
Answer:
The purpose of this exercise is to let students construct the number line (positive and negative numbers and zero) using a compass.

Have students draw a line, place a point on the line, and label it 0.

Have students use the compass to locate and label the next point 1, thus creating the scale. Students continue to locate other whole numbers to the right of zero using the same unit measure.

Using the same process, have students locate the opposites of the whole numbers. Have students label the first point to the left of zero – 1.

Introduce to the class the definition of the opposite of a number.

Sample student work is shown below. 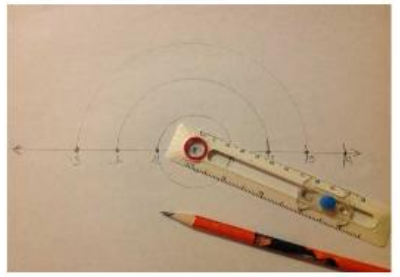