Students, who are looking for learning the ways on how to convert from fractions to decimals can find them all here? Conversion of Fractions to Decimal Numbers means you wish to present the fractional numbers as exact decimals. Then, look no further as we have listed the easy way to convert fraction to decimal in a detailed way here.

Before going deep into the concept, you need to understand first the concept of decimal and fractions. Refer to the entire article to know about the procedure on how to convert a fraction to a decimal number along with solved examples. Practice these questions on converting fractions to decimal numbers and improve your math skills.

A fraction is a part of the whole number and is expressed as the ratio of two numbers. Let us consider two numbers a, b and therefore the fraction is the ratio of those two numbers i.e. a/b where b≠0. Here a is termed the numerator and b is the denominator. We can perform different arithmetic operations on decimal fractions almost like numbers.

How to Convert Fraction to Decimal?

Method 2: Multiply both numerators, denominators by a similar number

Example: Convert 1/4 into the decimal form?
Solution: The given fraction is 1/4
Divide 1/4 using the long division.

Example 2.
Convert the fraction number 7(1/2) into a decimal?

Example 5.
Find the decimal of 3/4 using the long division method? 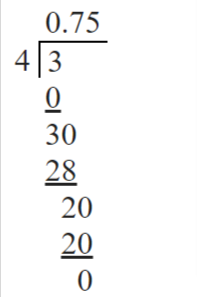 Therefore, the decimal value of the given number is 0.75. 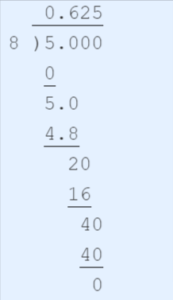 A Decimal Number is a number that has a dot between the digits. In other words, we are able to say that decimals are nothing but fractions with denominators as 10 or multiples of 10.

2. How to Convert a Fraction to Decimal?

We can convert the Fraction to the Decimal of a given number to divide the numerator by the denominator value.

3. What are the methods for conversion of fractions to decimals?

There are 3 methods for converting fractions to decimals is.