Roman Numerals are the numeral system which is originated in ancient Rome. It is a decimal or base 10 number system. It is an additive or subtractive system in which letters are used to denote some base numbers and arbitrary numbers in the number system and denoted using a different combination of symbols. Here, students can check the Roman Numerals Chart, how to convert roman numerals to numbers, and solved examples in the following sections. 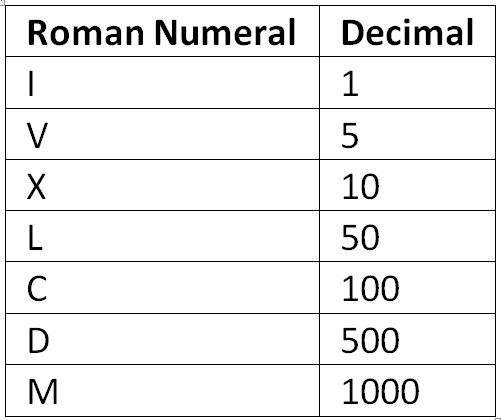 Roman numerals Chart has particular roman numbers for the decimal numbers from 1 to 1000. 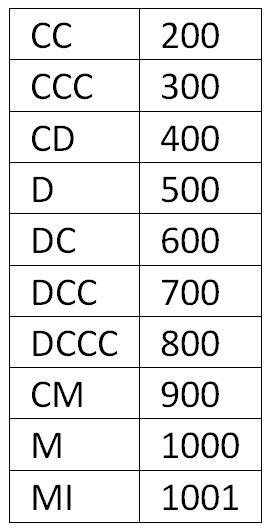 Rules for formation of Numbers

We have three different rules to form the roman numerals as numbers. They are multiplication rule, addition rule, and subtraction rule.

When a roman symbol is repeated in sequence, then we have to multiply the value of the numeral by the number of times it is repeated. A symbol cannot be repeated more than three times in series.

We cannot express 4 as IIII. Because the symbol cannot be repeated more than three times.

If a smaller number is located to the right of a larger number, then you need to add numbers.

We do not subtract 5 from any symbol. VX is not correct.

Write the Roman Numerals for 57.

The given decimal number is 57

Break up the number into Tens and Ones.

The symbol for 7 is VII.

Write the number for XXIV.

Given roman numeral is XXIV

Write the Roman Numerals for 18.

The given decimal number is 18.

Break up the number into Tens and Ones.

So, the symbol for 8 is VIII

Write the number for XXXIX.

Given roman numeral is XXXIX

3. What is the use of roman numerals?

Roman numerals can be used for labeling the name or position of a person or an object. Examples are Kiran came IInd in the class. Prince Charles III, Schools have Classes from VIth to Xth.