Choose the correct term from the box to complete each sentence.

Question 5.
Use Tools The table and the equation each show a proportional relationship between time x, in seconds, and distance y, in meters. Who would finish a 100-meter race faster? How much faster? State what strategy and tool you will use to answer the question, explain your choice, and then find the answer. 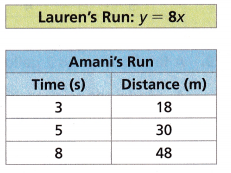 Question 6.
The graph shows right triangles ∆ABC and ∆ADE. The hypotenuse of each triangle lies on the same line. 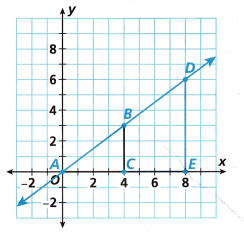 Question 7.
The graph of a proportional relationship is shown.
A. What is the amount Kai earns per hour?
$ ___ per hour
Answer: 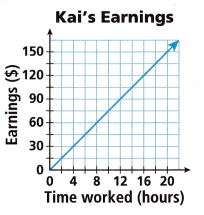 B. Write an equation that relates Kai’s earnings y, in dollars, to x, the number of hours he works.
Answer:
y = 7.5x

Question 9.
A fire hose sprays 2 gallons of water every 1.5 seconds.
A. Model the relationship between the time in seconds and the amount of water sprayed in gallons with a graph.
Answer: 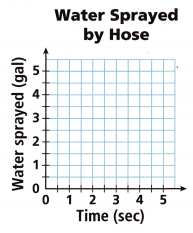 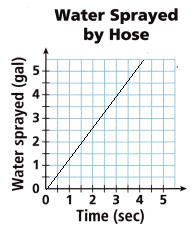 B. At what rate is the hose spraying water, in gallons per second? Use numbers from the box to show the rate in simplest form. Write a number in each box.