Know how questions are framed on the topic of HCF by referring to the Word Problems on HCF and get an idea of how to find HCF quickly using various methods. We will show different methods to solve the problems on Highest Common Factor (HCF).

The largest common factor of all the given numbers is called as Highest Common Factor (H. C. F). The number can be divided into exactly two or more numbers without any remainder. The HCF is also known as the Greater Common Factor (GCF). The easiest way to find the HCF of two given numbers is to create a Tree factor. Let us discuss with an example about HCF.

H.C.F is simply the Highest Common Factor. Let a and b be two integers. The formula to find the HCF of a and b is given as,
HCF = Product of two numbers / L.C.M of two numbers
HCF = (a x b) / L.C.M (a,b)
Where L.C.M is the Least Common Multiple.

These three different methods are to find the H.C.F of given numbers is explained step by step here.
1. HCF by Prime Factorization (Factor Tree Method):
In calculating HCF by Prime Factorization, we factorize the numbers into Prime factors, which is known as Prime Factors. Follow the below steps to find the HCF of numbers using the Prime Factorization Method,
Step 1: Initially, check whether the given number is divisible by 2.
Step 2: Now, divide until you cannot divide the number any further.
Step 3: Finally, write the numbers as the product of the prime numbers. The product of those common factors is that the Highest Factor of the given numbers.
Example: What is the HCF of 6 and 8?
Solution: The values are 6 and 8.
Factors of 6 are,

2. HCF by Division Method:
You have understood by now the strategy of finding the common highest factor using Prime Factorization. Now, learn here to find HCF using Division Method. The division method is nothing but divides the given number, simultaneously, to get the common factors between them. Follow the steps mentioned below of division method,
Step 1: In the division method, first, treat the smaller number as the divisor and the bigger number as the dividend.
Step 2: Divide the given number until you get the remainder as 0.
Step 3: We are going to get the common prime factors because the factors within the left-hand side divide all the numbers exactly. The product of those common prime factors is that the HCF of the given numbers.
Example: Find the HCF of the 10 and 15?
Solution: Given the values 10 and 15,
Using the division method, 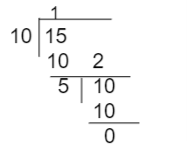 The Properties of HCF are listed in the below lines for quick reference. They are as under
Property 1: The HCF of any two or more numbers isn’t greater than any of the given numbers.
Property 2: If one number is the factor of the other number, their HCF will be the smallest number.
Property 3: The HCF of the numbers is the product of the co-prime factors.
Property 4: HCF of two or more Prime numbers is always 1.

Example 3:
What is the HCF of 48 and 56 using the Prime Factorization Method?

Solution:
Given the values 48 and 56.
Now, we find the HCF using the Prime Factorization Method.

2. Write the relation between HCF and LCM?

It is the Highest of the common factor of two or more numbers.

4. How do we use Highest Common Factor?

The HCF is used to simplify the fractions. HCF or GCD is that the greatest number that divides exactly into two numbers.

5. What are the tricks and formulas to find HCF?

The formulas and tricks to find HCF is,