Exercise 2.
Perform necessary calculations to determine which game to recommend to the child. Explain your choice in terms of both tickets and price. Is this the result you anticipated?

The fishing game would be the best game to play because, on average, the child will earn about 9 tickets for each play—but for the spinning wheel and slot machine games, she will only win about 5 or 4 tickets (respectively, on average) for each play.

Exercise 3.
The child states that she would like to play the slot machine game because it offers a chance of winning 500 tickets per game, and that means she might only have to play twice to reach her goal, and none of the other games offer that possibility. Using both the information from the distributions above and your expected value calculations, explain to her why this might not be the best strategy.
Answer:
While the child is correct in her statement, the chances of earning 500 tickets with 1 play at the slot machine are very small. The event would happen in the long run only 1 out of 1,000 tries. The chances of earning 1,000 tickets in only 2 tries is very small (probability = 0.001∙0 .001 = 0.000 001 = \(\frac{1}{1000000}\) or 1 in 1 million). Given the rare chance of a high payout and the high chance of a low payout, the slot machine is not the way to go.

Exercise 4.
The company can market and maintain only one of the two policy types, and some people in the company feel it should market Plan B since it earns the higher premium from the customer and has the lower claim payout amount. Assume that the cost of required resources for the two types of policies is the same (for the advertising, selling, or maintaining of the policies) and that the same number of policies would be sold for either Plan A or Plan B. In terms of earning the most money for the insurance company, do you agree with the Plan B decision? Explain your decision.
Answer:

The Plan A policy would be better for the company as it has the higher expected value (and it is assumed that the same number of policies would be sold regardless of the plan). This means the company will earn more on average for every Plan A policy sold than it would for every Plan B policy sold—specifically, $20.65 more per policy sold on average. This difference will really add up as more and more policies are sold. So, even though Plan B has a higher premium and a lower payout, a payout is much more likely to occur with Plan B, making it the less attractive option.

Question 1.
In the previous lesson, a duck pond game was described with the following payout distribution to its players:

where Y represents the net amount that a player won (or lost) playing the duck game one time.
This led to a situation where the people running the game could expect to gain $0.75 on average per attempt.
Someone is considering changing the probability distribution as follows:

Will this adjustment favor the players, favor the game’s organizers, or will it make no difference at all in terms of the amount the organization can expect to gain on average per attempt?
Answer:
The expected value for the adjusted distribution:

So, the new distribution will favor the game’s organizers. On average, the organizers will earn an additional $0.03 for every game played.

Question 2.
In the previous lesson’s Problem Set, you were asked to make a model of a spinning wheel with a point distribution as follows:

When X represents the number of points earned in a given spin, E(X) = 0.25 points.

Suppose you change the probabilities by “moving” 10% of the distribution as follows:

a. Without performing any calculations, make a guess as to whether or not this new distribution will lead to a player needing a fewer number of attempts than before on average to attain 5 or more points. Explain your reasoning.
Answer:
Since the chance of winning 2 points is higher, the chance of losing 3 points is lower, and the chance of earning 0 points is unchanged, that probably means that a person can reach 5 points more quickly than before.

Question 3.
You decide to invest $1,000.00 in the stock market. After researching, you estimate the following probabilities:

a. At first glance, which seems to be the most appealing?
Answer:
Answers vary. Sample response: Stock A seems more appealing because there are lower probabilities of making no profit and losing the entire $1,000.00 investment.

b. Which stock should you decide to invest in and why? Is this what you predicted?
Answer:
Let X represent the value of the investment in Stock A after 1 year.

Let Yrepresent the value of the investment in Stock B after 1 year.

Question 4.
The clock is winding down in the fourth quarter of the basketball game. The scores are close. It is still anyone’s game. As the team’s coach, you need to quickly decide which player to put on the court to help ensure your team’s success. Luckily, you have the historical data for Player A and Player B in front of you.

a. At first glance, whom would you put in and why?
Answer:
Answers vary.

b. Based on these statistics, which player might be more likely to help lead your team to victory and why?
Answer: 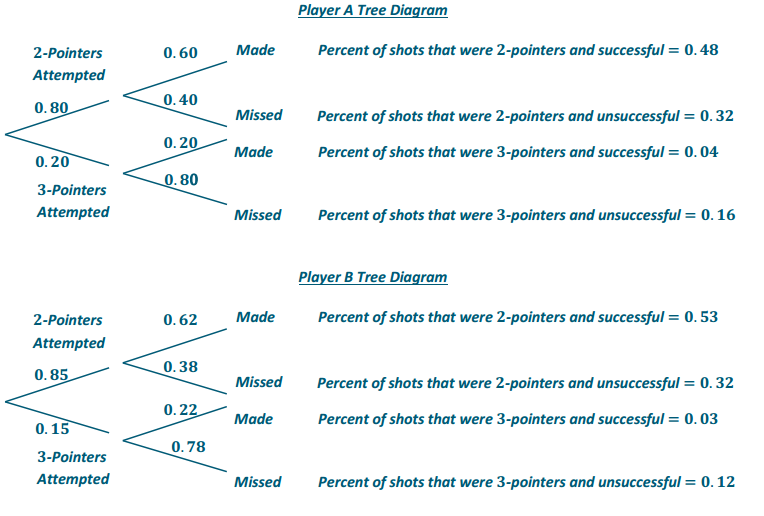 From the analysis, it appears as though Player B might be able to score slightly more points than Player A with 1.15 points per shot versus 1.08. However, both players have very close expected points per shot, so either would be a viable candidate.

The math section of the SAT contains 44 multiple – choice questions, with choices A–E. Suppose you answer all the questions but end up guessing on 8 questions. How might your math score look different on your score report using each point system? Explain your answer.
Answer:
Let X represent points per question with deduction.

Question 1.
In the previous lesson, you examined the Maryland Lottery’s Pick 3 game where the chance of winning with a Front Pair bet is 0.01. (http://mdlottery.com/games/pick – 3/payouts)
In that game, a successful bet of $1.00 pays out $50.00 for a net gain to the player of $49.00.
Imagine that the state also offers a $1.00 scratch – off lottery game with the following net gain distribution: 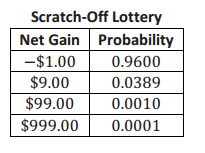 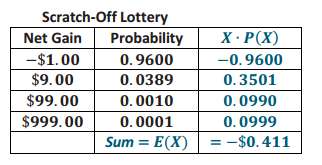 So, if a person was going to play a $1.00 game over and over again, he should play the scratch – off game as the player’s average loss per game is lower by about $0.09. (Note: Both games have negative expected values; placing the $1.00 in a bank savings account each day is a much better idea in terms of earning money.)