Exercises 1–4
Exercise 1.
Let X represent the monetary value of the prize that you win playing this game 1 time in dollars. Complete the table below, and calculate E(X).

Exercise 2.
Regarding the E(X) value you computed above, can you win exactly that amount on any 1 play of the game?
Answer:
No, you cannot win exactly $1.25 on any 1 play. On average, you are expected to win $1.25 per play if you were to play many times.

Exercise 4.
How would you explain the E(X) value in context to someone who had never heard of this measurement? What would you expect for the total monetary value of your prizes from 4 attempts at this game? (To answer this question, check the introduction to this lesson; do not do anything complicated like developing a tree diagram for all of the outcomes from 4 attempts at the game.)
Answer:
On average, a person is expected to win $5.00 (4∙E(X)) for every 4 attempts. The winnings could be as little as $2.00 (4 small) or as large as $20.00 (4 larges). If 4 attempts were made many times, the winnings would average out to be about $5.00.

Answer:
Let X represent the number of left turns made by 1 mouse. 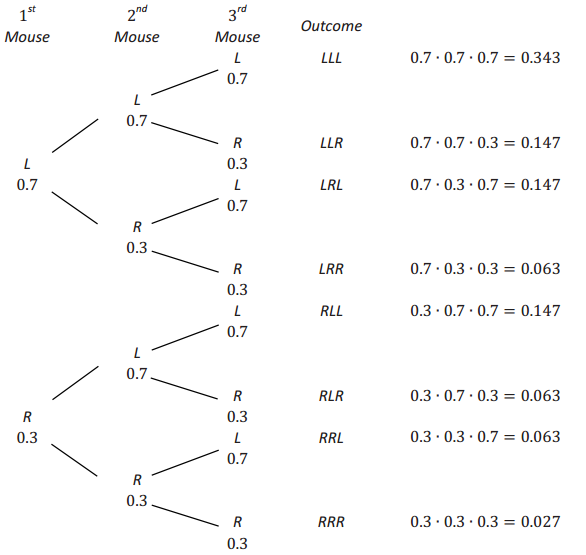 Exercise 7.
Use the tree diagram to answer the following questions:
a. Complete the following table, and compute E(Y), the expected number of left turns for 3 mice.

Answer:
Let Y represent the number of left turns made by 1 mouse.

Exercise 8.
Imagine that 200 mice are sent through the maze one at a time. The researchers believed that the probability of a mouse turning left due to the food is 0.7. How many left turns would they expect from 200 mice?
Answer:
200∙0.7 = 140
They would expect 140 left turns.

Exercise 10.
For two of the outcomes, the net earnings result is negative. What does a negative value of net earnings mean in context as far as the player is concerned?
Answer:
A negative expected value from the player’s perspective means a loss.

Exercise 11.
Let Y represent the net amount that you win (or lose) playing the duck game 1 time. Complete the table below, and calculate E(Y).

The results of each spin are added to one another, and the object is for a player to accumulate 5 or more points. Negative total point values are possible.
a. Develop a model of a spinning wheel that would reflect the probabilities and point values.
Answer: 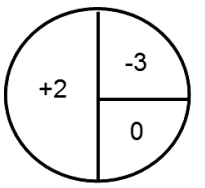 d. Use the spinning wheel you developed in part (a) (or some other randomization device) to take a few spins. See how many spins it takes to reach 5 or more points. Comment on whether this was fewer spins, more spins, or the same number of spins you expected in part (c).
Answer:
Answers will vary. In most cases, a player can reach 5 or more points with very few spins, often far fewer than the average of 20.

The distribution is very skewed right, and sometimes it takes many spins to get to 5 or more points.
The average number of spins needed based on these 33 simulations was 23.12 spins, close to the
E(Y) = 20. In most cases, a player can reach 5 or more points with very few spins, often far fewer than the average of 20. (Note: This may be a good chance to remind students that it is important to see the center, shape, and spread of a distribution before drawing conclusions about a variable.)

Question 1.
As posted on the Maryland Lottery’s website for its Pick 3 game, the chance of winning with a Front Pair bet is 0.01. (http://mdlottery.com/games/pick – 3/payouts/ accessed on November 17, 2013)