Example: Revisiting Vectors and Resultant Forces
The goalie on the soccer team kicks a ball with an initial force of 135 Newtons at a 40° angle with the ground. The mass of a soccer ball is 0.45 kg. Assume the acceleration due to gravity is 9.8\(\frac{\mathrm{m}}{\mathrm{s}^{2}}\) .
a. Draw a picture representing the force vectors acting on the ball and the resultant force vector.
Answer:
In the diagram below, Fb represents the force of the kick and Fg represents the force due to gravity. 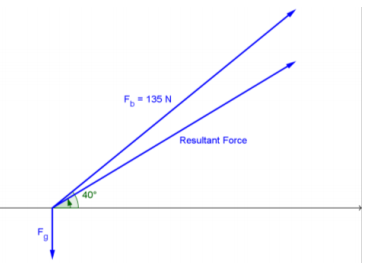 Opening Exercise
a. For each triangle shown below, decide whether you should use the law of sines, the law of cosines, or neither to begin finding the missing measurements. Explain how you know. 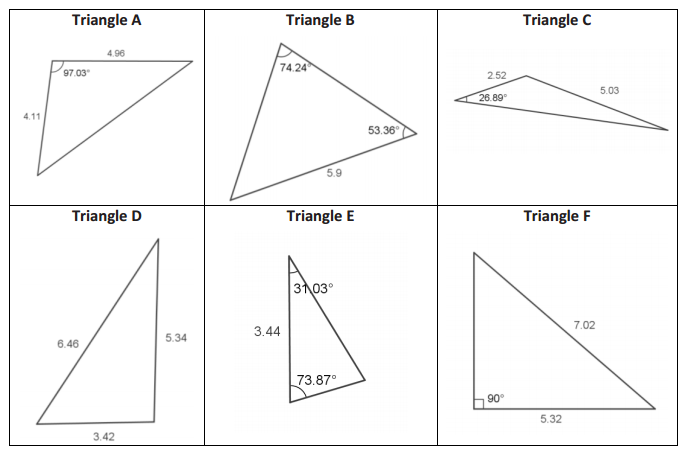 b. What types of given information will help you to decide which formula to use to determine missing measurements? Summarize your ideas in the table shown below:
Determining Missing Measurements 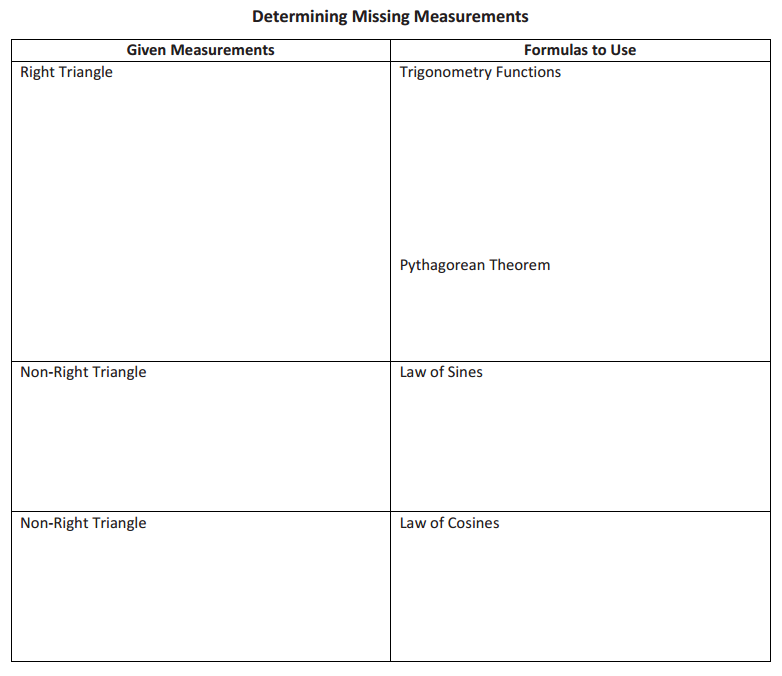 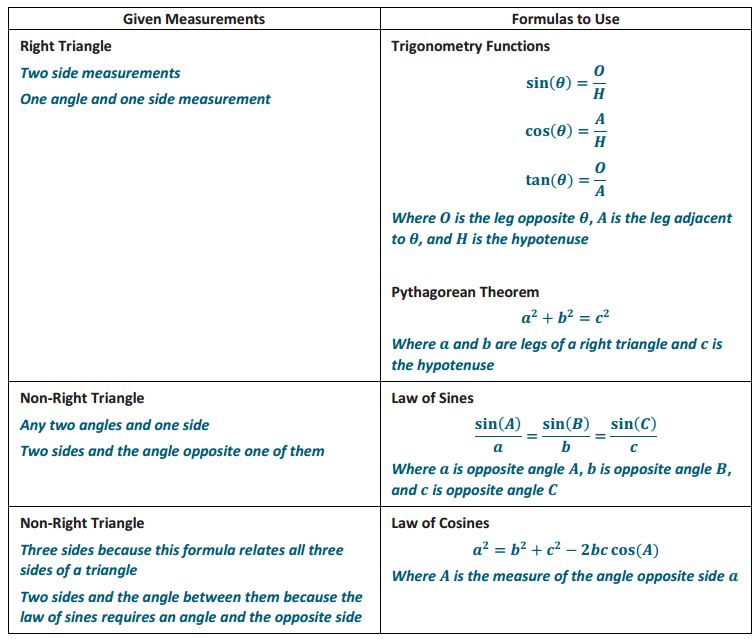 Exercises 1–7
Exercise 1.
A landscape architect is given a survey of a parcel of land that is shaped like a parallelogram. On the scale drawing the sides of the parcel of land are 8 in. and 10 in., and the angle between these sides measures 75°. The architect is planning to build a fence along the longest diagonal. If the scale on the survey is 1 in.  = 120 ft., how long will the fence be?
Answer: 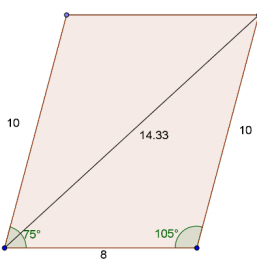 Exercise 2.
A regular pentagon is inscribed in a circle with a radius of 5 cm. What is the perimeter of the pentagon?
Answer: 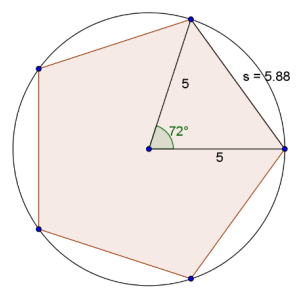 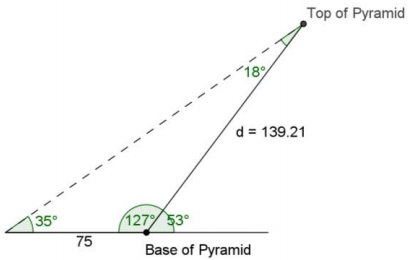 Exercise 4.
A surveyor needs to determine the distance across a lake between an existing ferry dock at point A and a second dock across the lake at point B. He locates a point C along the shore from the dock at point A that is 750 meters away. He measures the angle at A between the sight lines to points B and C to be 65° and the angle at C between the sight lines to points A and B to be 82°. How far is it from the dock at A and the dock at B?
Answer: 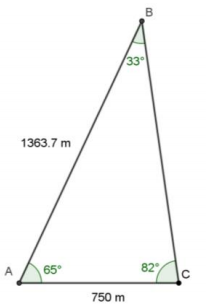 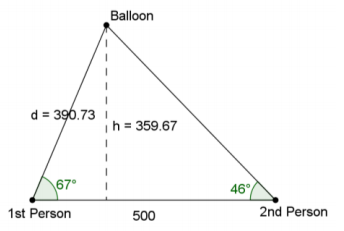 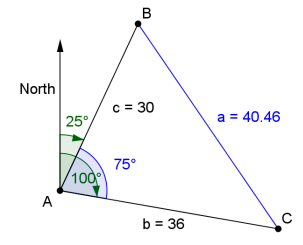 Exercise 7.
An airplane travels on a bearing of 200° for 1500 miles and then changes to a bearing of 250° and travels an additional 500 miles. How far is the airplane from its starting point?
Answer: 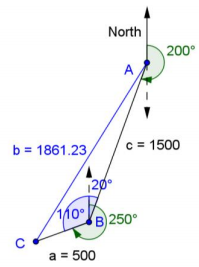 Exercise 9.
A 13 lb. force and a 20 lb. force are applied to an object located at A as shown in the diagram below. What is the resulting force and direction being applied to the object at A? 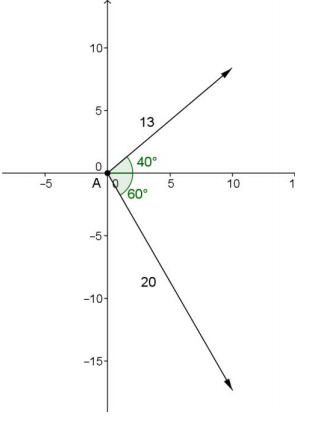 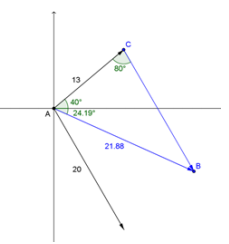 Exercise 10.
A motorboat travels across a lake at a speed of 10 mph at a bearing of 25°. The current of the lake due to the wind is a steady 2 mph at a bearing of 340°.
a. Draw a diagram that shows the two velocities that are affecting the boat’s motion across the lake.
Answer: 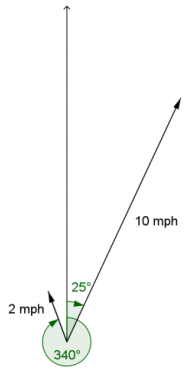 b. What is the resulting speed and direction of the boat?
Answer: 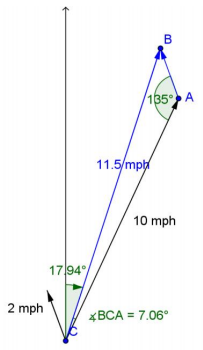 Question 1.
For each of the situations below, determine whether to use the Pythagorean theorem, right triangle trigonometry, law of sines, law of cosines, or some other method.
a. 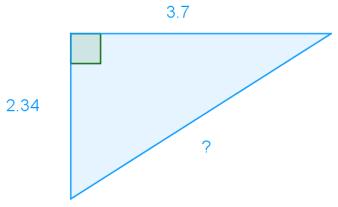 b. Know one side and an angle of a right triangle and want to find any other side.
Answer:
Right triangle trigonometry 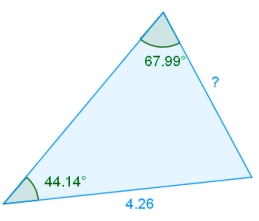 d. Know two angles of a triangle and want to find the third.
Answer:
Find the sum of the measures of the two known angles, and subtract the result from 180°. 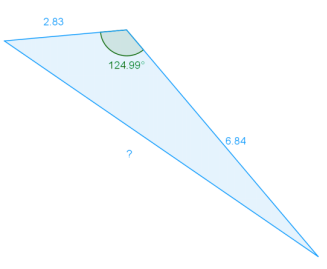 f. Know three sides of a triangle and want to find an angle.
Answer:
Law of cosines 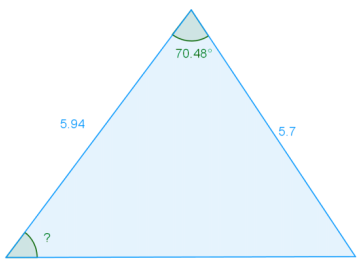 h. Know a side and two angles and want to find the third angle.
Answer:
Find the sum of the measures of the two known angles, and subtract the result from 180°. 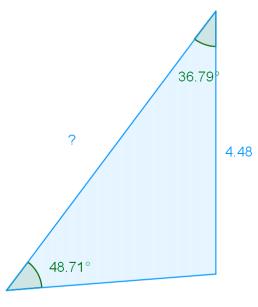 Question 2.
Mrs. Lane’s trigonometry class has been asked to judge the annual unmanned hot – air balloon contest, which has a prize for highest flying balloon.
a. Sarah thinks that the class needs to set up two stations to sight each balloon as it passes between them. Construct a formula that Mrs. Lane’s class can use to find the height of the balloon by plugging the two angles of elevation so that they can program their calculators to automatically output the height of the balloon. Use 500 ft. for the distance between the stations and α and β for the angles of elevation.
Answer:
b = 500 \(\frac{\sin (\beta)}{\sin \left(180^{\circ} – \alpha – \beta\right)}\)
h = b sin⁡(α)
h = \(\frac{500 \sin (\alpha) \sin (\beta)}{\sin \left(180^{\circ} – \alpha – \beta\right)}\)

d. Based on your results in part (c), which balloon won the contest?
Answer:
The student with the balloon that went 390 ft.

f. Are there any improvements to Mrs. Lane’s class’s methods that you would suggest? Explain.
Answer:
Answers may vary. Students could suggest higher degrees of accuracy by adjusting the distance between the students. Multiple angles of elevation could be taken from different spots, or additional students could help measure to minimize human error.

Question 3.
Bearings on ships are often given as a clockwise angle from the direction the ship is heading (0° represents something in the path of the boat, and 180° represents something behind the boat). Two ships leave port at the same time. The first ship travels at a constant speed of 30 kn. After 2 \(\frac{1}{2}\) hours, the ship sights the second at a bearing of 110° and 58 nautical miles away.
a. How far is the second ship from the port where it started?
Answer:
109 nautical miles from port

b. What is the resultant magnitude of the vector in the direction of the paintball?
Answer:
58.999 N

Question 5.
Valerie lives 2 miles west of her school and her friend Yuri lives 3 miles directly northeast of her.
a. Draw a diagram representing this situation.
Answer: 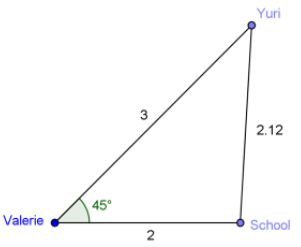 Question 6.
A 2.1 kg rocket is launched at an angle of 33° with an initial force of 50 N. Assume the acceleration due to gravity is 9.81 m/s2 .
a. Draw a picture representing the force vectors and their resultant vector.
Answer: 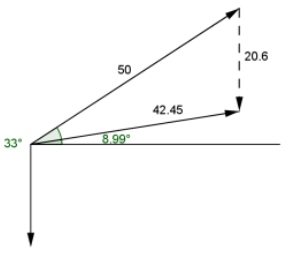 Question 1.
A triangular pasture is enclosed by fencing measuring 25, 35, and 45 yards at the corner of a farmer’s property. 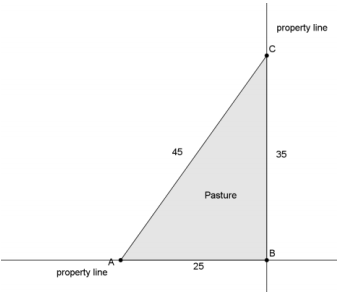 c. Where does the 45 – yard section of the fence cross the vertical property line?
Answer: 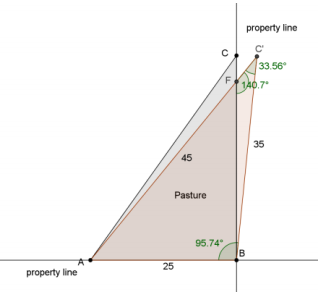