Question 1.
a. In the following diagram, triangle XYZ has side lengths a, b, and c as shown. The angle α indicated is acute. Show that the area A of the triangle is given by A=\(\frac{1}{2}\) ab sin⁡(α). 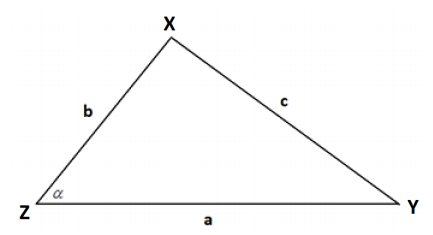 Answer:
Draw an altitude as shown. Call its length h. 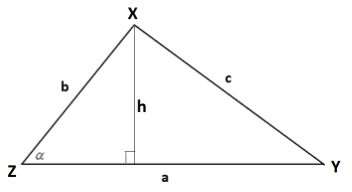 b. In the following diagram, triangle PQR has side lengths p, q, and r as shown. The angle β indicated is obtuse. Show that the area A of the triangle is given by A=\(\frac{1}{2}\) pq sin⁡(β).

Answer:
Draw in an altitude as shown. Call its length h .

Question 2.
Triangle ABC with side lengths a, b, and c as shown is circumscribed by a circle with diameter d. 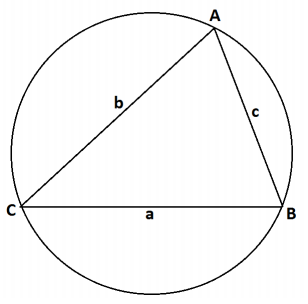 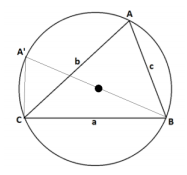 c. Prove that c2=a2+b2-2ab cos⁡(C) for the triangle shown in the original diagram.
Answer: 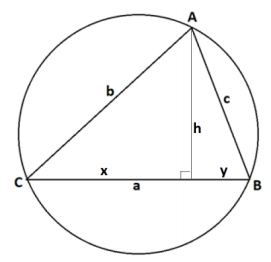 a. To one decimal place, what is the distance between Ari and Cece?
Answer:
The following diagram depicts the situation described: 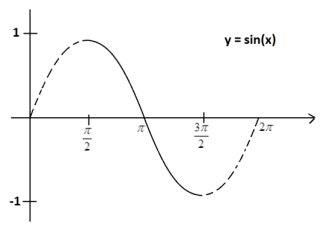 b. Is it possible to construct an inverse to the cosine function if the domain of the cosine function is restricted to the set of real values between \(\frac{\pi}{2}\) and \(\frac{3\pi}{2}\)? If so, what is the value of cos-1 (\(\frac{1}{2}\)) for this inverse function? Explain how you reach your conclusions.
Answer: 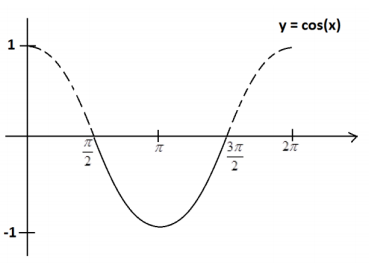 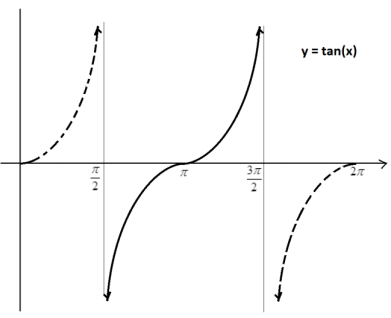 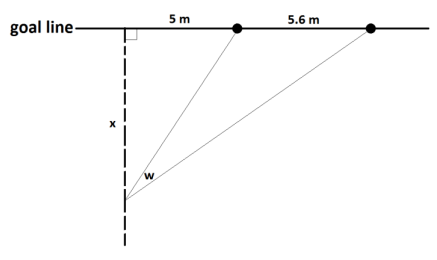 According to the rules of the game, an attempt at a conversion must be taken at a point on a line through the point of touchdown and perpendicular to the goal line. If a touchdown occurred 5 meters to one side of a goal post on the goal line, for example, the dashed line in the diagram indicates the line on which the conversion must be attempted.
Suppose the conversion is attempted at a distance of x meters from the goal line. Let w be the angle (measured in radians) indicated subtended by the goal posts.
a. Using inverse trigonometric functions, write an expression for w in terms of the distance x.
Answer:
Label the angle y as shown: 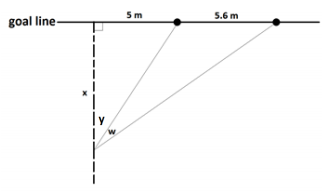 b. Using a graphing calculator or mathematics software, sketch a copy of the graph of the angle measure w as a function of x on the axes below. Indicate on your sketch the value of x that maximizes w. What is that maximal angle measure? (Give all your answers to two decimal places.)

c. In the original diagram, we see that the angle of measure w is one of three angles in an obtuse triangle. To two decimal places, what is the measure of the obtuse angle in that triangle when w has its maximal possible measure?
Answer:
Label the obtuse angle a and the length L as shown. 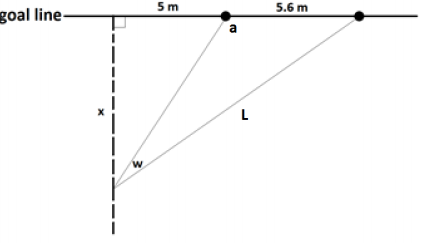 Question 6.
While riding her bicycle, Anu looks down for an instant to notice a reflector attached to the front wheel near its rim. As the bicycle moves, the wheel rotates and the position of the reflector relative to the frame of the bicycle changes. Consequently, the angle down from the horizontal that Anu needs to look in order to see the reflector changes with time.

As Anu rides along a straight path, she knows that there will be a moment in time when the reflector, the valve, and her eye will be in line. She wonders what the angle between the horizontal from her eye and the line from her eye to the reflector passing through the valve is at this special moment.

According to these estimates, what is the measure, to one decimal place in radians, of the angle Anu seeks? 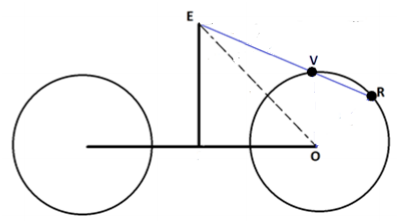 In this diagram, O represents the center of the front wheel, E the location of Anu’s eye, and R and V the positions of the reflector and valve, respectively, at the instant R, V, and E are collinear.
Answer:
The following is a schematic diagram of Anu on her bicycle. The point O is the center of the front wheel, the point E is the location of Anu’s eye, and the points R and V are the locations of the reflector and the valve, respectively, on the rim of the front wheel and the instant those two points and E are collinear. We have |EO| = 6 feet and
|OR | = |OV | = 1.5 feet, and we seek the measure of angle a shown. 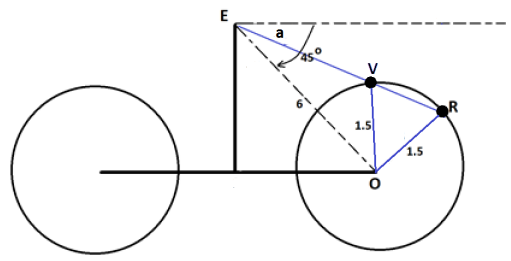