→ What limitations are there on x and y?
Both x and y should be positive numbers because they represent time and volume. 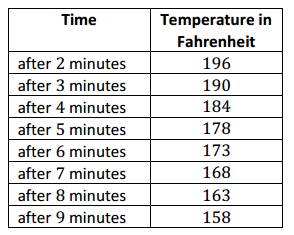 Our function led us to believe that after 9 minutes the soup would be safe to eat. The data in the table shows that it is still too hot.

→ Sir Isaac Newton not only studied the motion of objects under gravity but also studied the rates of cooling of heated objects. He found that they do not cool at constant rates and that the functions that describe their temperature over time are indeed far from linear. (In fact, Newton’s theory establishes that the temperature of soup at time x minutes would actually be given by the formula y = 70 + 140(\(\frac{133}{140}\))x.)

Example 4.
Consider the function that assigns to each of nine baseball players, numbered 1 through 9, his height. The data for this function is given below. Call the function G. 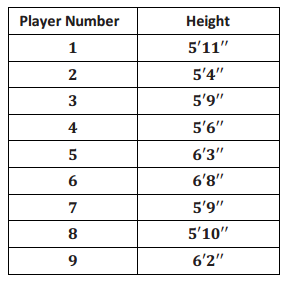 Answer:
→ What output does G assign to the input 2?
The function G assigns the height 5′ 4” to the player 2.

→ Could the function G simultaneously assign a second, different output to player 2? Explain.
No. The function assigns height to a particular player. There is no way that a player can have two different heights.
→ It is not clear if there is a formula for this function. (And even if there were, it is not clear that it would be meaningful since who is labeled player 1, player 2, and so on is probably arbitrary.) In general, we can hope to have formulas for functions, but in reality we cannot expect to find them. (People would love to have a formula that explains and predicts the stock market, for example.)

Exercise 1.
At a certain school, each bus in its fleet of buses can transport 35 students. Let B be the function that assigns to each count of students the number of buses needed to transport that many students on a field trip.

When Jinpyo thought about matters, he drew the following table of values and wrote the formula B = x/35. Here x is the count of students, and B is the number of buses needed to transport that many students. He concluded that B is a linear function.

Alicia looked at Jinpyo’s work and saw no errors with his arithmetic. But she said that the function is not actually linear.
a. Alicia is right. Explain why B is not a linear function.
Answer:
For 36 students, say, we’ll need two buses—an extra bus for the extra student. In fact, for 36,37, …, up to 70 students, the function B assigns the same value 2. For 71,72, …, up to 105, it assigns the value 3. There is not a constant rate of increase of the buses needed, and so the function is not linear.

Exercise 2.
A linear function has the table of values below. It gives the costs of purchasing certain numbers of movie tickets.

b. Is the function discrete? Explain.
Answer:
The function is discrete. You cannot have half of a movie ticket; therefore, it must be a whole number of tickets, which means it is discrete.

Exercise 3.
A function produces the following table of values. 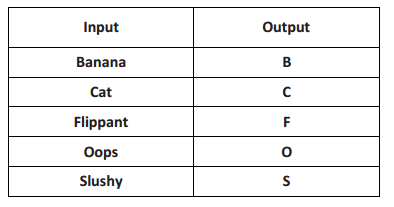 a. Make a guess as to the rule this function follows. Each input is a word from the English language.
Answer:
This function assigns to each word its first letter.

b. Is this function discrete?
Answer:
It is discrete.

Question 1.
The costs of purchasing certain volumes of gasoline are shown below. We can assume that there is a linear relationship between x, the number of gallons purchased, and y, the cost of purchasing that many gallons.

a. Write an equation that describes y as a linear function of x.
Answer:
y = 3.65x

b. Are there any restrictions on the values x and y can adopt?
Answer:
Both x and y must be positive rational numbers.

Question 2.
A function has the table of values below. Examine the information in the table to answer the questions below. 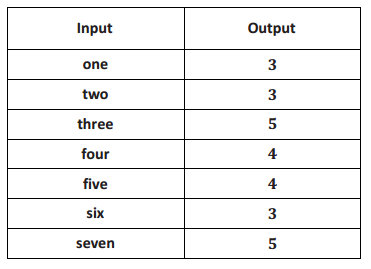 b. What number would the function assign to the word eleven?
Answer:
We do not have enough information to tell. We are not even sure if eleven is considered a valid input for this function.

Question 3.
The table shows the distances covered over certain counts of hours traveled by a driver driving a car at a constant speed.

b. Are there any restrictions on the value x and y can adopt?
Answer:
Both x and y must be positive rational numbers.

Question 4.
Consider the function that assigns to each time of a particular day the air temperature at a specific location in Ithaca, NY. The following table shows the values of this function at some specific times.

b. Are there any restrictions on the types of values x and y can adopt?
Answer:
The input is a particular time of the day, and y is the temperature. The input cannot be negative but could be intervals that are fractions of an hour. The output could potentially be negative because it can get that cold.

e. Is it reasonable to assume that this linear function could be used to predict the temperature for 10:00 a.m. the following day or a temperature at any time on a day next week? Give specific examples in your explanation.
Answer:
No. There is no reason to expect this function to be linear. Temperature typically fluctuates and will, for certain, rise at some point.
We can show that our model for temperature is definitely wrong by looking at the predicted temperature one week (168 hours) later:
y = 92 – 1.5(168)
y = – 160.
This is an absurd prediction.

Question 1.
The table below shows the costs of purchasing certain numbers of tablets. We can assume that the total cost is a linear function of the number of tablets purchased.

b. Is the function discrete? Explain.
Answer:
The function is discrete. You cannot have half of a tablet; therefore, it must be a whole number of tablets, which means it is discrete.

Question 2.
A function C assigns to each word in the English language the number of letters in that word. For example, C assigns the number 6 to the word action.
a. Give an example of an input to which C would assign the value 3.
Answer:
Any three – letter word will do.

b. Is C a discrete function? Explain.
Answer:
The function is discrete. The input is a word in the English language, therefore it must be an entire word, not part of one, which means it is discrete.