Example 1: The Order in Ordered Pairs
The first number of an ordered pair is called the ___________ .
Answer:
first coordinate.

Example 2.
Using Ordered Pairs to Name Locations
Describe how the ordered pair is being used in your scenario. Indicate what defines the first coordinate and what defines the second coordinate in your scenario.
Answer:
Ordered pairs are like a set of directions; they indicate where to go in one direction and then indicate where to go in the second direction.
→ Scenario 1: The seats in a college football stadium are arranged into 210 sections, with 144 seats in each
section. Your ticket to the game indicates the location of your seat using the ordered pair of numbers
(123,37). Describe the meaning of each number in the ordered pair and how you would use them to find your seat.

→ Scenario 2: Airline pilots use measurements of longitude and latitude to determine their location and to find airports around the world. Longitude is measured as 0 – 180° east or 0 – 180° west of a line stretching from the North Pole to the South Pole through Greenwich, England, called the prime meridian. Latitude is measured as 0 – 90° north or 0 – 90° south of the earth’s equator. A pilot has the ordered pair (90° west, 30° north). What does each number in the ordered pair describe? How would the pilot locate the airport on a map? Would there be any confusion if a pilot were given the ordered pair (90°, 30°)? Explain.

→ Scenario 3: Each room in a school building is named by an ordered pair of numbers that indicates the number of the floor on which the room lies, followed by the sequential number of the room on the floor from the main staircase. A new student at the school is trying to get to science class in room 4 – 13. Describe to the student what each number means and how she should use the number to find her classroom. Suppose there are classrooms below the main floor. How might these rooms be described?

Exercise 1.
Name the letter from the grid below that corresponds with each ordered pair of numbers below. 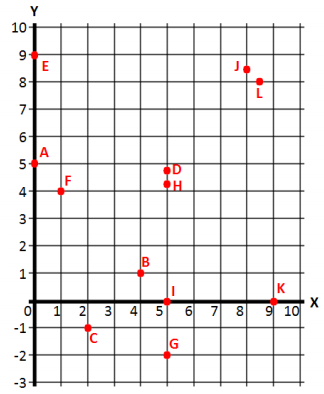 Exercise 2.
List the ordered pair of numbers that corresponds with each letter from the grid below. 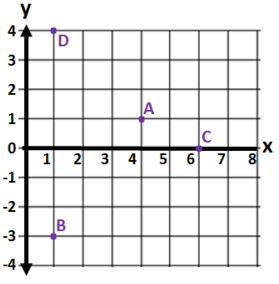 c. These points’ horizontal and vertical distances from the origin are equal, but only one coordinate is positive.
Answer:
Answers will vary; examples are (3, – 3), (- 8,8).