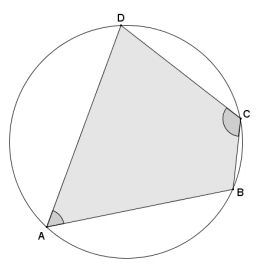 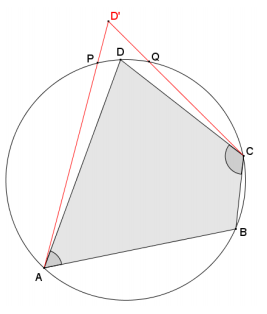 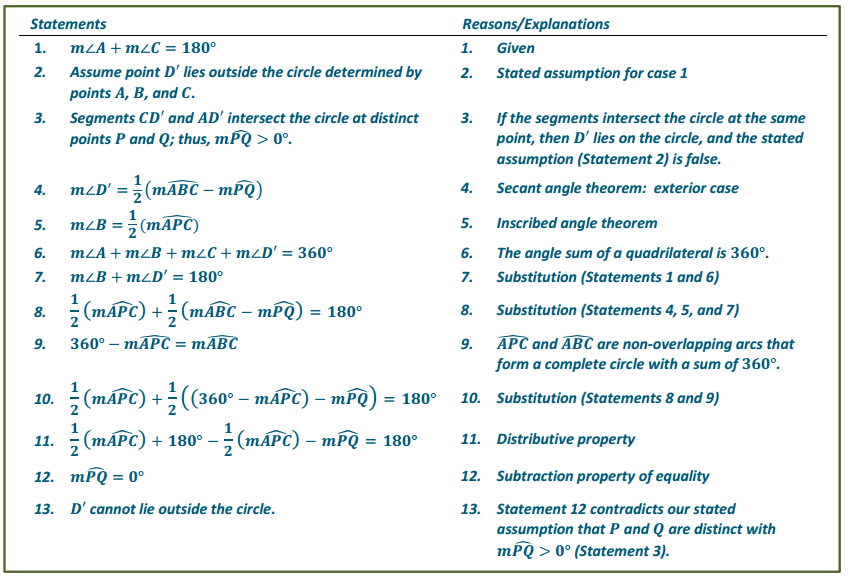 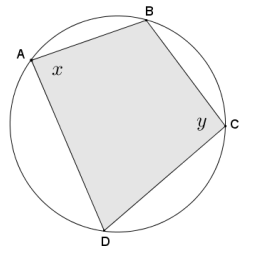 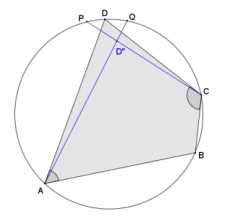 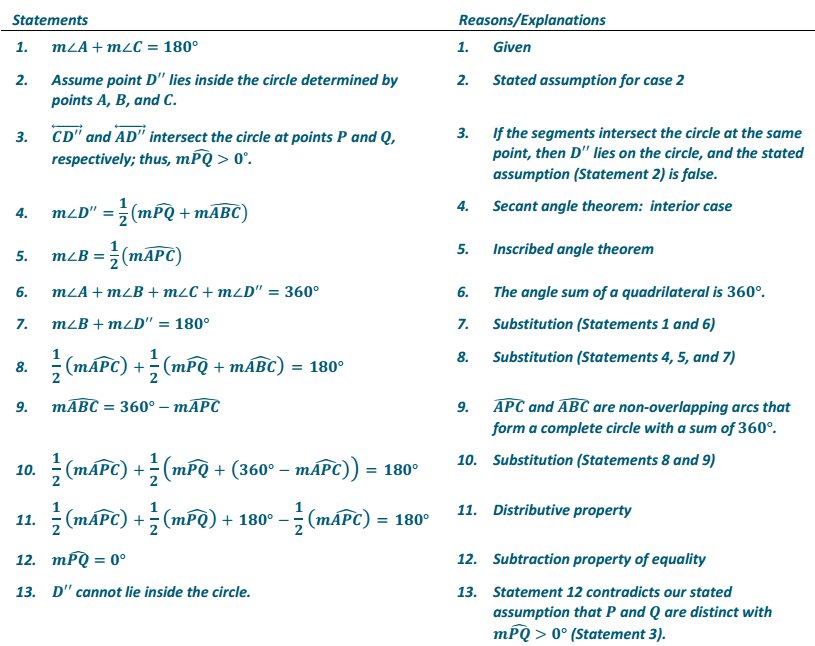 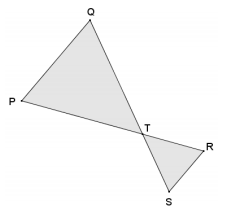 Answer:
Since PQRS is a cyclic quadrilateral, draw a circle on points P, Q, R, and S. ∠PQS and ∠PRS are angles inscribed in the same \(\widehat{S P}\); therefore, they are equal in measure. Also, ∠QPR and ∠QSR are both inscribed in the same \(\widehat{Q R}\); therefore, they are equal in measure. Therefore, by AA criterion for similar triangles, △PQT ~△SRT.
(Students may also use vertical angles relationship at T.) 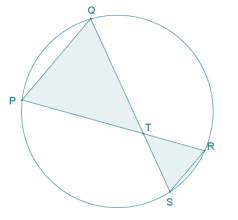 Exercise 3.
A cyclic quadrilateral has perpendicular diagonals. What is the area of the quadrilateral in terms of a, b, c, and d as shown? 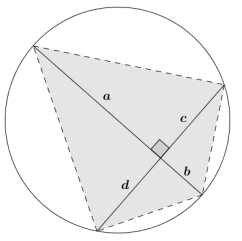 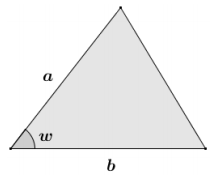 Answer:
Draw an altitude to the side with length b as shown in the diagram to form adjacent right triangles. Using right triangle trigonometry, the sine of the acute angle with degree measure w is 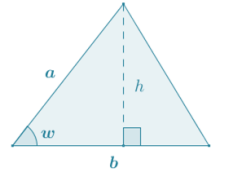 Answer:
Draw an altitude to the line that includes the side of the triangle with length b. Using right triangle trigonometry: 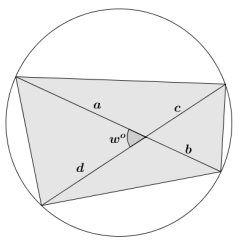 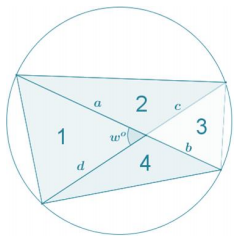 Question 1.
Quadrilateral BDCE is cyclic, O is the center of the circle, and m∠BOC = 130°. Find m∠BEC. 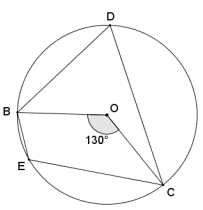 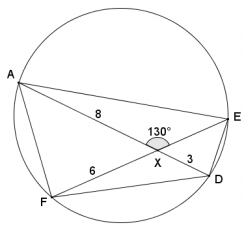 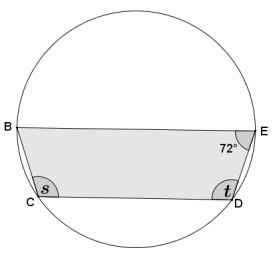 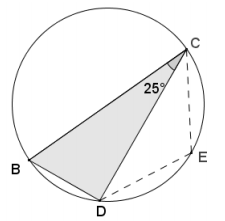 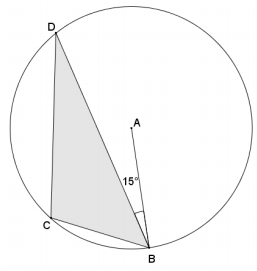 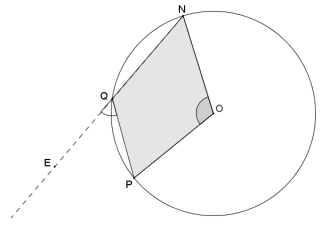 Answer:
Draw point X on major arc \(\widehat{N P}\), and draw chords \(\overline{X N}\) and \(\overline{X P}\) to form cyclic quadrilateral QuestionXP. By the inscribed angle theorem, m∠NXP = \(\frac{1}{2}\) m∠NOP, so m∠NXP = 56°.
An exterior angle PQE of cyclic quadrilateral QuestionXP is equal in measure to the angle opposite from vertex Q, which is ∠NXP. Therefore, m∠PQE = 56°.

Question 7.
Given the angle measures as indicated in the diagram below, prove that vertices C, B, E, and D lie on a circle. 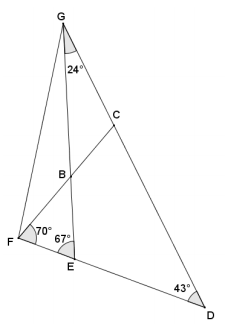 Answer:
Using the angle sum of a triangle, m∠FBE = 43°. Angles GBC and FBE are vertical angles and, therefore, have the same measure. Angles GBF and EBC are also vertical angles and have the same measure. Angles at a point sum to 360°, so m∠CBE = m∠FBG = 137°. Since 137 + 43 = 180, angles EBC and EDC of quadrilateral BCDE are supplementary. If a quadrilateral has opposite angles that are supplementary, then the quadrilateral is cyclic, which means that vertices C, B, E, and D lie on a circle.

Question 8.
In the diagram below, quadrilateral JKLM is cyclic. Find the value of n. 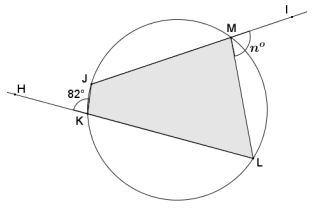 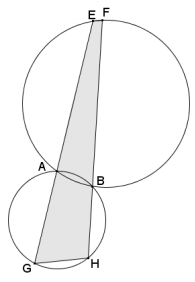 Question 11.
A quadrilateral is called bicentric if it is both cyclic and possesses an inscribed circle. (See diagram to the right.) 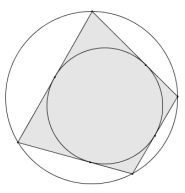 c. Based on the relationships highlighted in part (b), there are four pairs of congruent segments in the diagram. Label segments of equal length with a, b, c, and d.
Answer:
See diagram on the right. 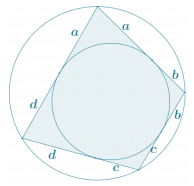 Question 12.
Quadrilateral PSRQ is cyclic such that \(\overline{P Q}\) is the diameter of the circle. If ∠QRT ≅ ∠QSR, prove that ∠PTR is a right angle, and show that S, X, T, and P lie on a circle. 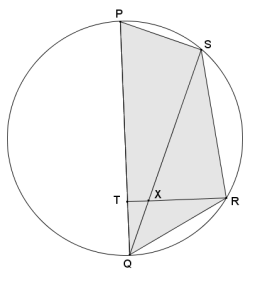 Question 1.
What value of x guarantees that the quadrilateral shown in the diagram below is cyclic? Explain. 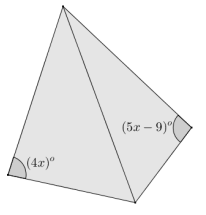 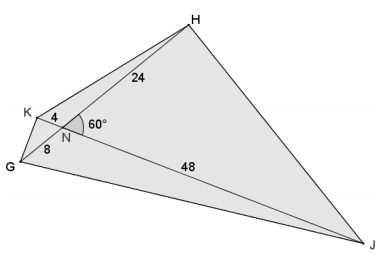