Exercise 1.
Would you change any of the assignments of 1 – 5 that Alan made? Explain your answer. Assign the numbers 1 – 5 to the event descriptions based on what you think is the best strategy to win the game.

Exercise 2.
Carry out a turn by observing an outcome from spinning Spinner 1 and picking a card. How many points did you earn from this first turn?
Answer:
Answers will vary.

Exercise 3.
Complete four more turns (for a total of five), and determine your final score.
Player: Your Turn
Scoring Card for Scenario 1:

Answer:
Answers will vary depending on the outcomes when the student plays the game.

Exercise 4.
If you changed the numbers assigned to the descriptions, was your score better than Alan’s score? Did you expect your score to be better? Explain. If you did not change the numbers from those that Alan assigned, explain why you did not change them.
Answer:
Note: This question provides students on opportunity to begin explaining the strategy they ore using in this game. Anticipate that in most coses students are assigning the larger numbers (the 5 or the 4) to the outcomes they think are most likely.

At this point in the lesson, students have not been asked to calculate the actual probabilities of the events of interest. However, some students may have already calculated or estimated the probabilities. Anticipate that students change the assignment of numbers to try to improve their scores.

As students discuss strategies for assigning numbers based on whkh events are most likely to occur, they are also
evaluating the thinking of others.

Exercise 7.
Recall that an event is a collection of outcomes from the sample space. One event of interest for someone with Scenario Card 1 is “odd number on Spinner 1 and a red card.” What are the outcomes that make up this event? List the outcomes of this event in the first row of Table 1 (see Exercise 9).
Answer:
See the completed chart in Exercise 9.

Exercise 8.
What is the probability of getting an odd number on Spinner 1 and picking a red card from the card bag? Also enter this probability in Table 1 (see Exercise 9).
Answer:
See the completed table in Exercise 9. Direct students to write their probabilities as fractions or as decimals. Fractions do not need to be reduced, as the unreduced fractions are meaningful based on the context.

Exercise 9.
Complete Table 1 by listing the outcomes for the other events and their probabilities based on the chance experiment for this scenario card.

Answer:
The following table organizes the responses to Exercises 7 – 9:

Exercise 10.
Based on the above probabilities, how would you assign the numbers 1 – 5 to each of the game descriptions? Explain.
Answer:
If players assigned the points based on a 5 assigned to the event most likely to occur, followed by 4, etc., then there would be changes made to the assignment of points.

Exercise 11.
If you changed any of the points assigned to the game descriptions, play the game again at least three times and record your final scores for each game. Do you think you have the best possible assignment of numbers to the events for this scenario card?

If you did not change the game descriptions, also play the game so that you have at least three final scores. Compare your scores with scores of other members of your class. Do you think you have the best assignment of numbers to the events for this scenario card?

The final score for the above five turns is 23 points. This is a better score than Alan received from his assignment of points.

Exercise 12.
Why might you not be able to answer the question of whether or not you have the best assignments of numbers to the game descriptions with at least three final scores?
Answer:
To decide the best assignment of points involves playing the game many times.
Note: Use this question to point out that probability is a long run relative frequency. For this example, to get a good sense of the probabilities, students would need to play the game many times.

Exercise 13.
Write your answers to the following questions independently, and then share your responses with a neighbor:

a. How did you make decisions about what to bet on?
Answer:
Answers will vary. I calculated the probability of each outcome and bet in the order of probability, 5 (greatest) to 1 (least). I used probability but changed a few bets based on the earlier outcomes.

b. How do the ideas of probability help you make decisions?
Answer:
Answers will vary. Calculating probability gives you a good idea of the number of times on outcome will occur and helps you make better decisions.

Consider a second scenario card that Alan created for his game:

Question 3.
Based on the sample space, determine the outcomes and the probabilities for each of the events on this scenario card. Complete the table below.

Note that although each event is different, some events are subsets of another event. As a result, students want to assign a larger number to the event with more outcomes. Expect that students obtain scores of 4 or 5 for each turn. As an extension, students may be asked to revise the descriptions of the events on the strategy cards in order to make the game more challenging.

Question 5.
Determine at least three final scores based on the numbers you assigned to the events.
Player: Scott

Answer:
Responses will vary. Provided are three final scores based on outcomes from carrying out the game. 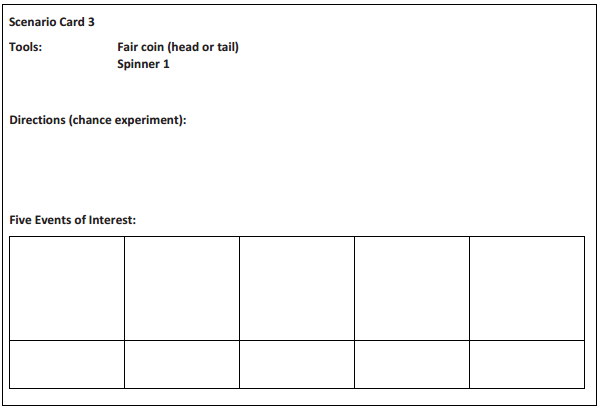 Answer:
Answers will vary. Encourage students to be creative with this part of their assignment. Anticipate language similar to that used in the examples. A sample response card is included.

The following is an example of a completed Scenario Card 3:

Question 7.
Determine the sample space for your chance experiment. Then, complete the table below for the five events on your scenario card. Assign the numbers 1 – 5 to the descriptions you created.

Question 8.
Determine a final score for your game based on five turns.

Answer:
Answers vary based on the descriptions developed by students. Note: If time permits, encourage selected students to explain their games to other members of the class.

Because the spinner has two sectors representing odd numbers and only one sector representing an even number, the numbers of outcomes in the two events are different. The probability of the first event is \(\frac{8}{18}\) compared to the probability of \(\frac{4}{18}\) for the second event.

Question 3.
If one of the red cards is changed to a blue card, what is the probability of the event “spinning an odd number from Spinner 1 and randomly selecting a red card from the card bag”?
Answer:
Changing one red card to a blue card will result in five blue cards and one red card in the card bag. Each of the five blue cards could be paired with each odd number that is possible from the spinner (the number 1 or the number 3). There would be a total of ten outcomes for this event. The number of outcomes in the sample space, however, would not change. As a result, the probability of this event is \(\frac{10}{18^{\prime}}\) which is approximately 0.556.