Opening Exercise
What does it mean to attend to precision when modeling in mathematics?
Answer:
Using clear and accurate language when interpreting the meaning and discussing the results of the mathematical model; labeling axes on a graph; specifying the meaning of a variable in a particular function; including units of measure when appropriate; showing mathematical work clearly using correct mathematical symbols and notations; making accurate calculations and checking for the reasonableness of the calculations.

Exercise 2.
The graph on the right represents the value V of a popular stock. Its initial value was $12/share on day 0.
Note: The calculator uses X to represent t, and Y to represent V. 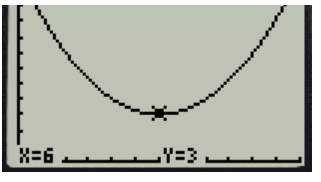 b. According to the American Cancer Society, in 2005 there were 211, 240 people diagnosed with breast cancer. In a written response, communicate how precise and accurate your solution in part (a) is, and explain why.
Answer:
My solution is precise because my classmates and I followed the same protocols and our values were similar to each other. Since the model we used did not take into account the population increase, our values were off by 11, 786 people, which is 5.6%. I believe that being off by only 5.6% is still pretty close to the actual value. My solution was precise and accurate; it could have been more accurate if the population growth was taken into account in the exponential model.

Question 2.
The functions f and g represent the population of two different kinds of bacteria, where x is the time (in hours) and f and g are the number of bacteria (in thousands). f(x) = 2x2 + 7 and g(x) = 2x.
a. Between the third and sixth hour, which bacteria had a faster rate of growth?
Answer:
Looking at the graphs of the two functions, the graph of y = g(x) is steeper over the interval [3, 6] than the graph of y = f(x). Therefore, the bacteria population represented by y = g(x) has a faster rate of growth on this interval. 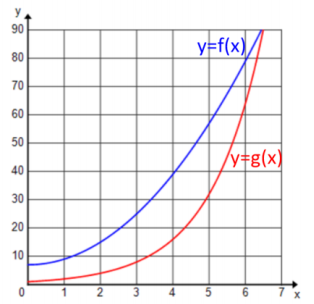 The distance a car travels before coming to a stop once a driver hits the brakes is related to the speed of the car when the brakes were applied. The graph of f (shown) is a model of the stopping distance (in feet) of a car traveling at different speeds (in miles per hour). 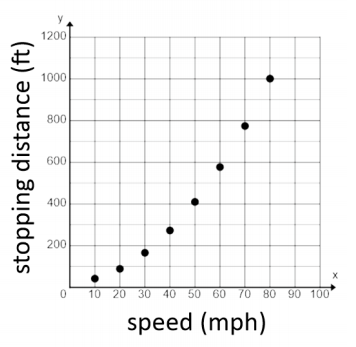 Question 1.
One data point on the graph of f appears to be (80, 1000). What do you think this point represents in the context of this problem? Explain your reasoning.
Answer:
In this problem, 80 would represent the speed in miles per hour and 1, 000 would represent the stopping distance in feet. It does not make sense for a car to be traveling at 1, 000 mph, much less only take 80 ft. to come to a stop.