Example 1.
Calculating Residuals
The curb weight of a car is the weight of the car without luggage or passengers. The table below shows the curb weights (in hundreds of pounds) and fuel efficiencies (in miles per gallon) of five compact cars.

Using a calculator, the least squares line for this data set was found to have the equation:
y=78.62-1.5290x,
where x is the curb weight (in hundreds of pounds), and y is the predicted fuel efficiency (in miles per gallon).

The scatter plot of this data set is shown below, and the least squares line is shown on the graph. 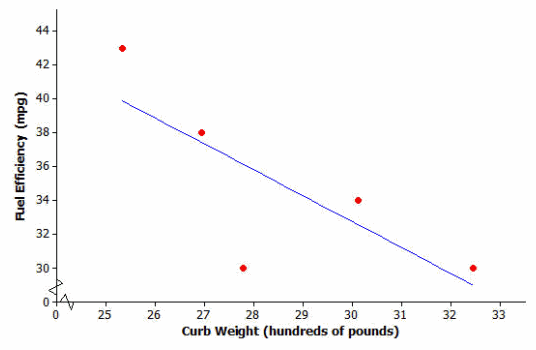 Example 2.
Making a Residual Plot to Evaluate a Line
It is often useful to make a graph of the residuals, called a residual plot. You will make the residual plot for the compact car data set.
Plot the original x-variable (curb weight in this case) on the horizontal axis and the residuals on the vertical axis. For this example, you need to draw a horizontal axis that goes from 25 to 32 and a vertical axis with a scale that includes the values of the residuals that you calculated. Next, plot the point for the first car. The curb weight of the first car is 25.33 hundred pounds and the residual is 3.1 mpg. Plot the point (25.33,3.1).
The axes and this first point are shown below. 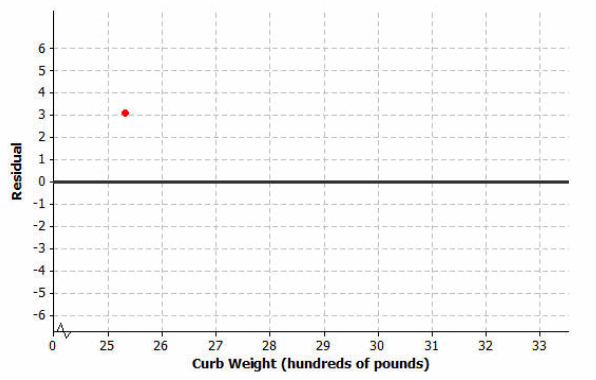 Exercise 1.
Will the residual for the car whose curb weight is 25.33 hundred pounds be positive or negative? Roughly what is the value of the residual for this point?
Answer:
Positive residual of 3 mpg; the actual value is approximately 3 units above the line.

Now confirm the estimated residuals by calculating the exact residuals using the least squares line as shown in the text.

These two residuals have been written in the table below.

Exercises 3–4
Continue to think about the car weights and fuel efficiencies from Example 1.

Exercise 3.
Calculate the remaining three residuals, and write them in the table.
Answer:
The residuals are shown in the table below.

b. Would you be surprised if the actual fuel efficiency of this car was 29 miles per gallon? Explain your answer.
Answer:
No. The residual for this point would be 29 mpg-31.2 mpg, or -2.2 mpg. This is within the range of the residuals for the table above.

Exercises 5–6
Plot the other four residuals in the residual plot started in Example 3.
Answer:
The completed residual plot is shown below. 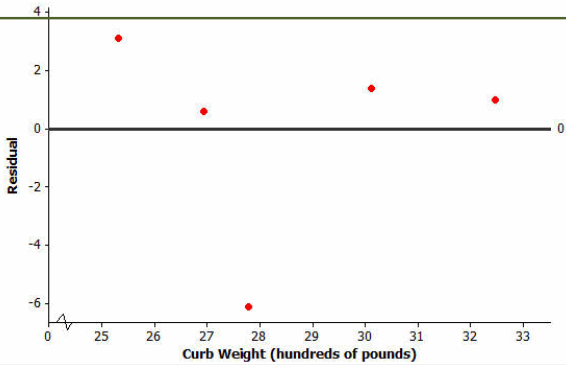 Four athletes on a track team are comparing their personal bests in the 100 meter and 200 meter events. A table of their best times is shown below. 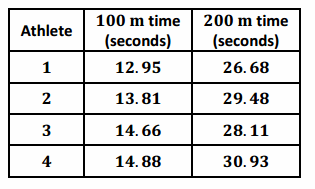 A scatter plot of these results (including the least squares line) is shown below. 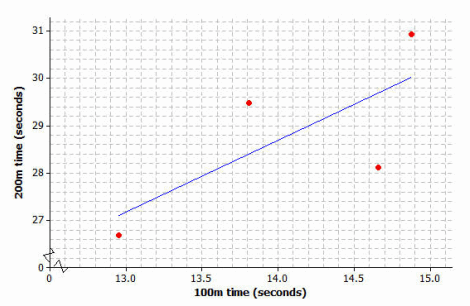 Question 1.
Use your calculator or computer to find the equation of the least squares line.
Answer:
y=7.526+1.5115x, where x represents 100-meter time and y represents 200-meter time.

Question 4.
Using the axes provided below, construct a residual plot for this data set. 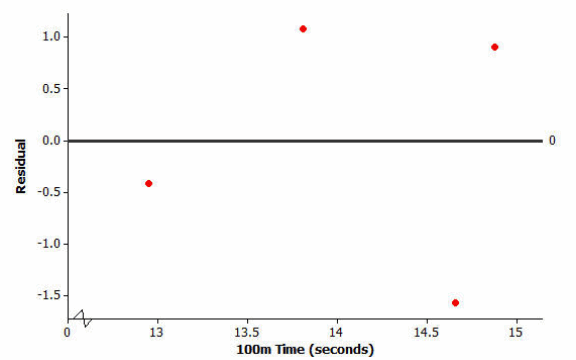 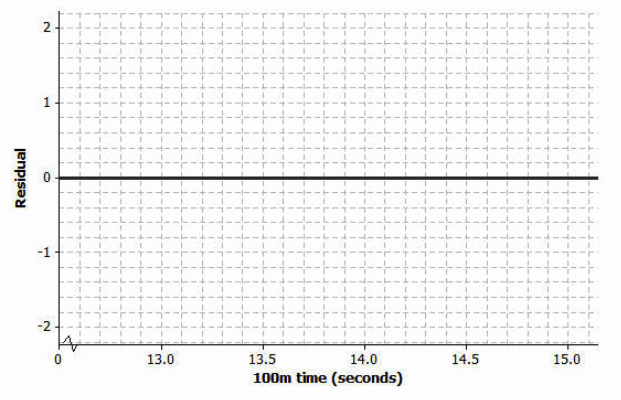 Question 1.
Suppose you are given a scatter plot (with least squares line) that looks like this: 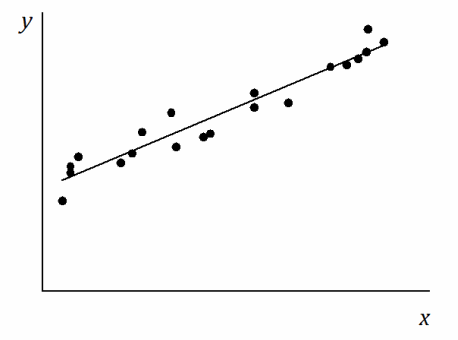 What would the residual plot look like? Make a quick sketch on the axes given below. (There is no need to plot the points exactly.) 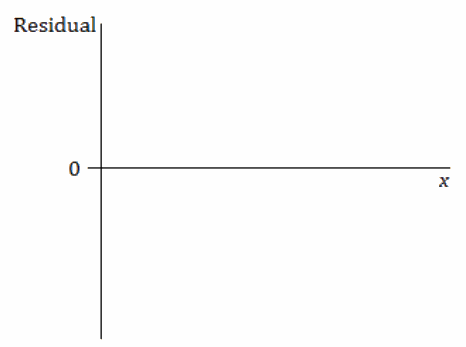 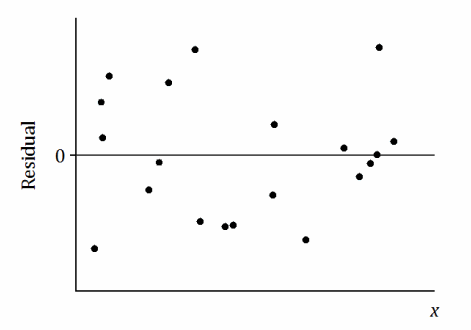 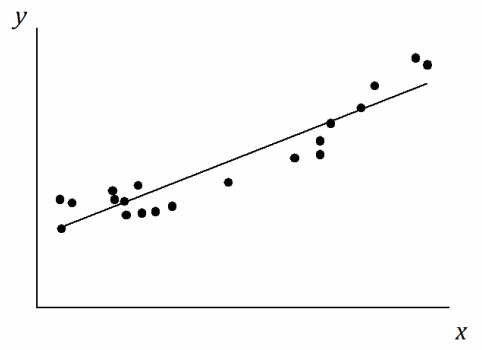 Make a quick sketch on the axes below of how the residual plot would look. 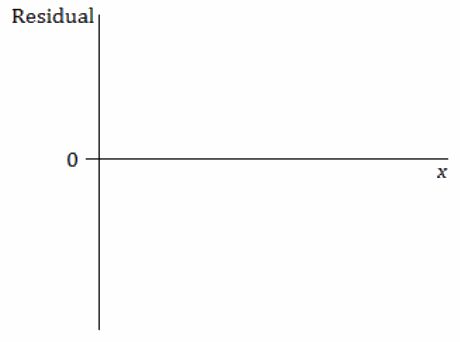 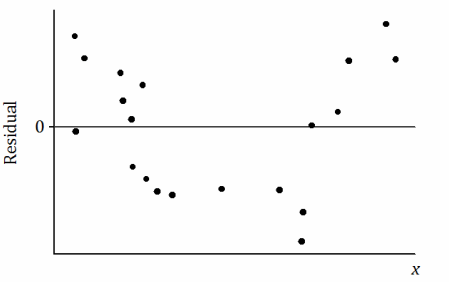 Note: It is important that students begin to see the general shape of the pattern in the residual plot, a random scatter of points in Problem 1, and a U-shape in Problem 2. Beyond that, the details of the residual plots are not of concern at this point in the study of residuals.