Learn what are Vertically Opposite Angles and how to calculate them in this article. Vertically Opposite Angles are the angles formed when two lines intersect each other. The vertically opposite angles are always equal to each other. The adjacent angles of vertically opposite angles are always supplementary angles and they form 180º when we add them. Find Lines and Angles concepts and problems on our website. 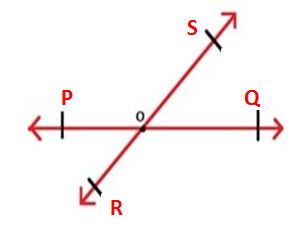 From the above figure, the line segment PQ and RS meet at the point O and these two lines are intersecting lines.

Note: A vertical angle and its adjacent angle is supplementary to each other. It means they add up to 180 degrees.

Theorem: In a pair of intersecting lines the vertically opposite angles are equal.

Proof: Consider two lines PQ and RS which intersect each other at O. The two pairs of vertical angles are:
i) ∠SOQ = ∠POR
ii) ∠SOP = ∠ROQ

1. In the given figure, find the measure of unknown angles.