Are you excited to know about the story of seasons? Every parent is eager to say about the seasons to their kids and every child is also interested in knowing about every season which comes in a year. Here, you can easily find the story of the seasons. Seasons which we see every year are in four types of seasons. Seasons mean changes in weather and hours of daylight and darkness. They are changed in a year because of the position of the earth around the sun. Let’s go into a detailed explanation of each season and its specialty.

What is a Season?

A season is a part of a year or period of the year which says about their unique climatic conditions. Every area on the earth has four seasons. The four seasons are the Spring Season, Summer Season, Autumn Season, and Winter Season whereas in India we have two more seasons namely the Rainy Season and Pre-Winter Season.

Every season differs in length of daylight, temperature, and weather conditions which repeats every year. The main reason for occurring a season is its tilt of the earth’s axis with respect to the plane of its orbit. The following image shows you a clear idea about the seasons that occur in a year. 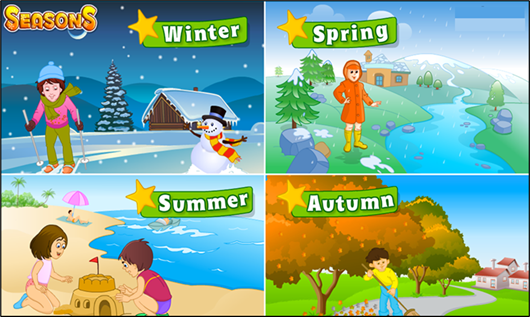 Types of Seasons | Seasons of the Year and their Months

Every season happens at different times by covering the complete year. Seasons are changed by the availability of sunlight in a particular region on earth and show the effect on the temperature of the region. The average of each season varies from two to three months in a year.

The Spring season comes between the winter and summer seasons. This season differs from one country to another country. In India, the spring season mostly between February to April whereas in western countries normally comes in between March to May, it depends on weather conditions and temperature based on the region. In the spring season, the nights would be usually cold and days are warm.

The Summer season starts from the end of the month of March to the end of the month of May. In this season, the rays of the sun on land are too hot and people try to avoid going outside. On days and nights, the temperature would be pleasant but at midday, the climate is too hot and the temperature would be high. In this season rivers go dry and there will be a scarcity of water. But, this season is famous in India because of the fruits that people love to eat and students enjoy their school holidays.

This season usually starts from the month of June to Mid-September. Monsoon comes after the summer season and it leads to very cool temperature and spreads some greenery everywhere. The temperature and weather condition becomes cool and rainfalls give cool winds to the people. Some of the people will enjoy more in this Monsoon season as it is also known as the rainy season.

The Autumn season occurs from the month of September to November. In this season the climate is neither too hot nor too cold. It is the best season. The special thing that happens in this season is the trees shed their leaves and that’s what we call this season also fall. During the autumn season, the days and nights would be cooler.

Winter is the coldest season of all seasons. It begins from the month of December to February. The length of the daylight is very small and nights come fast because of sunlight. The temperature will be very low and as we can see fog in the early morning times. There will be heavy snowfall in hilly and mountain areas which is loved by everyone and most kids love to play with the snowfall in this season.

The Story about Seasons

There are four seasons in a year called Spring, Summer, Autumn, and Winter. Each season is different from one another in every aspect like in temperature daylight, and climatic conditions, etc. A fine day, all the seasons had an argument in between and said, “I’m the best!” two seasons are calm with their individualities, and two or not well. What are they? the Summer season and the Winter season.

Both the seasons are conflicted from the moment they met. The Summer season says it prefers sunshine, heat, and feels to do anything like people can eat ice-cream, different fruits, and yummy foods they want. The winter season says it gives snowfall, fog in the early morning enjoyed by people, and people wear woolen clothes, caps, and sweaters to keep bodies warm. Even they can drink hot chocolate. Both are opposite from each other.

So, to resolve the problem the Spring and the Autumn seasons got together. The Spring says that it comes after the Winter season, the trees and the fields begin to flourish and stops the cold climate. Spring also said, ” I’m so green and feels fresh everywhere and flowers blossom, and birds can easily fly and small insects enjoy and make fun with new flowers”.

The Autumn season says, after summer I come with when trees shed or falling their leaves on land, it starts cold weather and rainfall occurs evenly. So, lastly, both the seasons tried to explain that they should come along to complete the life circle on Earth.

Spring seasons said to winter that’s it all because of you that all living beings are capable to live, and to Summer, it’s all of you and your beautiful sunshine gives life on the planet and the climate that fields thrive to give us food. You both are not different at all. Finally, Winter and Summer halted to think about the words said, and winter says “It’s true, Now I understood. We all should be together, to perform and function throughout the year to complete each season of a year.

Conclusion: They agreed that all were important and one could not do without the other and be united always to maintain balance on Earth. It was a story about the seasons.