In general, Subtraction is taking away one number from the other. If the numbers are easy we can simply subtract them in the head. However, if the numbers get trickier it gets difficult to do calculations in the head, and in such cases, you would go with the Column Method of Subtraction. You can perform with the subtraction placing the numbers easily if you are familiar with the Place Value Concept.

How to Use Column Subtraction Without Having to Borrow?

Follow the simple steps below to perform subtraction placing the numbers without having to borrow. They are along the lines 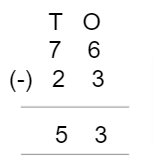 How to Use Column Subtraction with Borrow?

Go through the simple steps to subtract sums involving the borrow. Have a glance at the examples listed below to understand the concept. If at all the digits in any of the units place in the top number is smaller we use the borrow concept and then perform subtraction.

Example 1.
Subtract 44 from 122?
Solution:
Firstly, align the numbers in columns according to their place values i.e. units, tens, hundreds, and so on. Write down the bigger number at the top and then write the smaller number 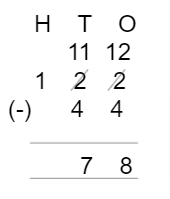 Example 2.
Subtract 34 from 110?
Solution:
Align the numbers in Columns at first. Write down the bigger number at the top and underneath it write the smaller number. 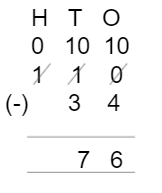