Have a look at Some Geometric Terms and Results. We have given a useful reference of geometric terms and their definitions along with solved examples. Most of the students feel difficult to understand Some Geometric Terms. So, to help such students, we explained all Geometric Terms in a clear and understandable way. We can get strong and exact results using Certain Geometric Statements. So, make use of the given formulas and get the easy process to solve problems.

We have also given Lines and Angles concepts and problems for free of cost on our website. 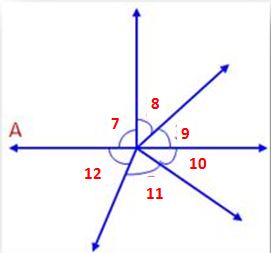 The two angles are considered to be equal if they have the same degree measure.

2. Bisector of an Angle

A ray that divides the given angle into two equal angles is called an angle bisector.

Perpendicular Lines are the lines that intersect each other to form right tangles between them. In the adjoining e, lines AB and CD intersect at 0 such that ∠COB = ∠ COA = ∠AOD = ∠BOD = 90°.
Therefore, we say that AB is perpendicular to CD, i.e., (AB ⊥ CD).