Kids are not aware of money more than youth and adults. But, they should know the basic significance of money from the age of preschool. Money is used to buy things and is represented in rupees, paise, penny, dollars, etc. Parents and teachers have to give sufficient and needy information to the students about the value of money and the use of money.

Here, you can find the need and value of money, especially on Rupees and Paise in a fun way. The students can seek the details of rupees and paise from this guide. So, let’s get into this article & gain complete knowledge regarding Rupees and Paise.

How to Teach Rupees and Paise for Kids?

Money comprises rupees and paise. A rupee contains 100 paise which is equal to one rupee. Money is in two forms: one is in coins and the other is in notes. Coins are in metallic form and notes are in the form of paper as money, in ancient times coins are of gold and silver. Denomination of currency is the appropriate explanation of money. In the world, each country has a self-denominated currency.

Rupees and Paise are used to purchase things from various markets and shops. Rupees & paise are the official currency of India. In ancient days, most of the things were purchased in paises. As days passed by the prominence of paise is decreased and coins are disappeared from markets. Let’s see the representation of some rupee notes from the below image. 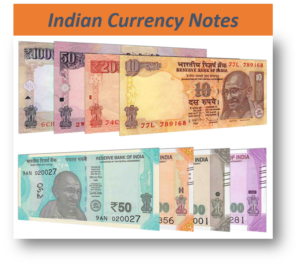 Notation of Paise and Rupees

For example, to write the currency in paise as 50 paise and the rupees in 10 rupees. In the form of notation, we write as Rs 10 and 50 P. We denote 40 rupees 15 paise as Rs 40.15. Let’s have a look at the Indian Currency coins image below for clear recognization. 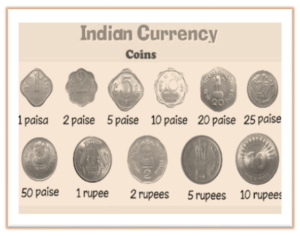 What are the Uses of Rupees & Paise?

There are some points why we use rupees are listed below:

How to Convert Paise into Rupees?

As we know, 1 rupee has 100 paise and see how many paises make a rupee by the conversions given in the below table:

Let’s see the Rupees and Paise as a list in the form of coins and notes.

As above listed, the notes of one rupee, two rupees, five rupee notes are fastly vanishing from markets.

FAQs on Rupees and Paise for Preschoolers

1. What are rupee and paise?

A rupee is an Indian currency either in coins or note forms. A paise is 1⁄100th of a rupee and the coins below one rupee are paise and above or equal to one rupee also known as rupee coins.

2. How do we denote rupee and paise & what is used to separate them?

3. In rupees and paise which is greater?