Related angles are nothing but the pairs of angles and assigned with specific names that we come across. Related angles have some conditions to mention. Learn the detailed concept of Related angles with images and examples in this article. Improve your preparation level by reading the entire concept without missing any subtopic. We have given complete information about Lines and Angles on our website for free of cost.

Check different types of Related Angles along with examples to clearly understand the concept. We have explained each of them with definitions, solved examples, etc. Refer to the following modules and get a grip on it.

If the sum of the measures of two angles is about 90°, those angles are called complementary angles. 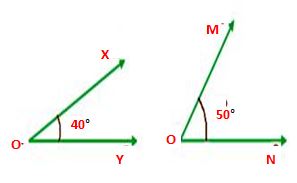 The ∠XOY is 40° and ∠MON is 50°. By adding two angles ∠XOY and ∠MON, we get 90° as they are the Complementary Angles.

From the above figure, the ∠XOY is 110° and ∠MON is 70°. By adding two angles ∠XOY and ∠MON, we get 180° as they are the Supplementary Angles.

The two angles are called to be Adjacent angles when they have a common arm, a common vertex, and also the non-common arms present on the opposite side of the common arm.

From the above figure, ∠ABD and ∠CBD are adjacent angles with the common arm BD. The B is the common vertex and BA, BC is opposite sides of BD. 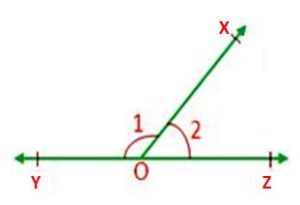 From the above figure, the ∠XOY and ∠XOZ are two adjacent angles. By adding two angles ∠XOY and ∠XOZ, we get 180°.

Given: A ray BE standing on (AC) ⃡ such that ∠ABE and ∠CBE are formed. 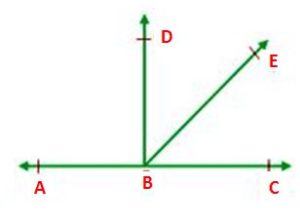 Given: A point O and rays OA, OB, OC, OD, OE which make angles around O.

3. If two lines intersect, then vertically opposite angles are equal.

Given: MN and AB intersect at point O.