In this article, you will learn about the Properties of Ratios. Ratios are one of the most important concepts in mathematics because of that we can understand how important they are in our day-to-day life. These play a major role in several things. Ratios are perhaps one of the most commonly used concepts that you can definitely know about it.  Ratios are simple in the mathematical term used for comparing two or more quantities that are measured in the same units.

On this page, we will discuss the definition of Ratios, Properties of Ratios, Example questions belonging to the concept, and so on. Ratios are mainly explained using fractions. If a fraction expresses in the form of a:b then it is called a ratio and when two ratios are equal it is said to be in proportion.

Ratios are the comparison of two quantities or more quantities that we express as a fraction. The concept of equivalent fractions will allow the ratios of different physical quantities to be the same sometimes. In some cases, the comparison of two quantities are using the division method is difficult. So, at that time, we use a ratio. The ratio explains to us how many times one quantity is equal to another quantity. So, the two numbers in a ratio can be expressed only when they have the same unit. The sign of ratio is ‘:’ 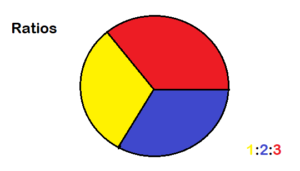 The real examples of a ratio are the rate of speed means distance/time, price of material means rupees/meter, and others. Hence, a ratio is a general independent term of a unit and we used for across multiple platforms.

Points to remember regarding Ratios

Consider that, suppose we have two quantities and we have to find the ratio of these two quantities, then the formula for that ratio is defined as
a: b ⇒ a/b
Where a, b be are two quantities. In this formula, a is called the first term or antecedent, and b is called a second term or consequent.

Students of 6th Grade Math can find plenty of concepts relating to mathematics all under one place here and get acquainted with concepts on a deeper level.

Property 1: We will express a Ratio only between two quantities of the same kind.
Property 2: In ratio, quantities to be compared by the division must be in the same units.
Property 3: In a ratio p: q, the first term that is P is called antecedent and the second term Q is called the consequent.
Property 4: The order of the terms in ratios is very important that is the positions of antecedent and consequent are not interchangeable.
Property 5: We call two ratios equivalent if their corresponding fractions are equivalent.
Property 6: If more than one like quantities are expressed in a ratio format, the resultant is termed as a Continued Ratios or a Compassion between the quantities. It can simply be represented as p: q: r: s.
Property 7: Both the terms of a ratio can be multiplied or divided by the same (non-zero) number. Generally, the ratio is expressed in the lowest term or simplest form.
Property 8: If a quantity increases or decreases in the ratio p: q, then the new quantity is  (b x original quantity) / a. The fraction by which the original quantity is multiplied to get a new quantity will be called the factor multiplying ratio.
Property 9 (Invertendo Property): One ratio is the inverse of another if their product is 1. Thus a:b is the inverse of b: a and vice-versa.
Property 10: A ratio a: b is said to be of greater inequality if a > b and of lesser inequality if a < b.
Property 11 (Alternendo Property): The ratio compounded of the two ratios a: b and c : d is ac: bd,  that is, if the second and third terms interchange their places, then also the four terms are in proportion.
Property 12: A ratio compounded of itself is called its duplicate ratio. So a2: b2 is the duplicate ratio of a: b. Similarly, the ratio of these a: b is a3: b3.
Property 13 (Componendo Property) : In ratio, we have four numbers a, b, c, d if a : b = c : d then (a + b) : b :: (c + d) : d.
Property 14 (Dividendo Property) : In dividend property, if a : b :: c : d then (a-b) : b :: (c – d): d.
Property 15 (Convertendo Property): If a:b :: c:d then (a-b) : b :: (c-d) : d , this is a convertendo property.
Property 16 (Componendo-Dividendo Property) : If a : b :: c : d then (a + b) : (a – b) :: (c + d) : (c – d).
Property 17 (Addendo Property) : In Addendo Property, If a : b = c : d = e : f, value of each ratio is (a + c + e) : (b + d + f).
Property 18 (Equivalent ratio property) : If a : b :: c : d then (a ± c) : (b ± d) : : a: b and (a ± c) : (b ± d) :: c : d, this is Equivalent Property.