Have a glance at the list of Parallelogram Concepts available below and use them for your reference. All you need to do is simply tap on the quick links and avail the underlying concept within. Practice as much as you can and solve all the problems easily.

Check the below properties of a parallelogram and solve the related problems easily by applying the same. They are as follows

Perimeter = 2 (a+b) units where a and b are the length of the sides of the parallelogram. 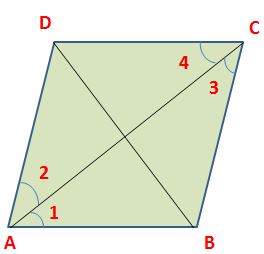 Therefore, ∆ ABC ≅ ∆ ACD (by ASA congruence)
⇒ AB = CD, BC = AD and ∠B = ∠D.
Similarly, by drawing the diagonal BD, we can prove that
∆ ABD ≅ ∆ BCD
Therefore, ∠A = ∠C
Thus, AB = CD, BC = AD, ∠A = ∠C and ∠B = ∠D.
This proves (i) and (ii)
In order to prove (iii) consider parallelogram ABCD and draw its diagonals AC and BD, intersecting each other at O.
In ∆ OAB and ∆ OCD, we have
AB = CD [Opposite sides of a parallelogram]
∠AOB = ∠ COD [Vertically opposite angles]
∠OAB = ∠OCD [Alternate angles]
Therefore, ∆ OAB ≅ ∆ OCD [By ASA property]
⇒ OA = OC and OB = OD.
This shows that the diagonals of a parallelogram bisect each other.