In mathematics, Numbers are usually used for counting, measuring, and checking quantities. Just like everything in the world numbers also have their respective words. Here, on this page, you will find the complete information about the Names of the Numbers. Students will already know some number names like from 1 – 20 but, here you can learn from 1 to n-digit number names. In preschool children are taught by number names which are fundamentals of maths.

What are Number Names? | Numbers in Words

A number is a series of symbols that have a special significance in themselves. In maths, a Number name is a process of describing numbers in words.

How to Write Number Names in Words?

To write Number Names in words you should know the place value of a digit. Based on the position of numbers we expand the numbers first and write their names of the number and combine those Number Names.

This is the easiest way to write down the Name of the Numbers. With the help of given examples, you can remind them how to expand and spell the words promptly. Let’s dive into the below sections for more details like importance, number names 1-50, etc.

Importance of Number Names in Words

Now, let us practice the numbers from 1 – 20 with their Number Names and memorize them easily. Number Name is the method of representing the numbers in words. Have a glance at the below table: 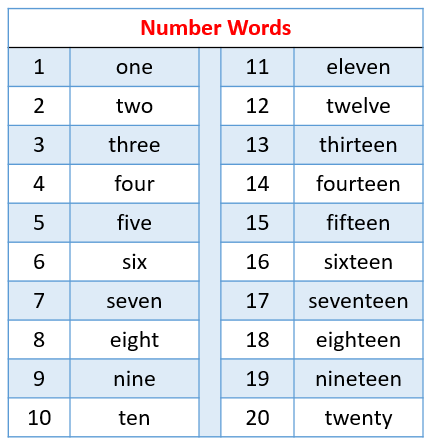 Examples of Names of Numbers

First, write the given number in expanded form and write the Number Names and then merge that name.
862 = 800 + 60 + 2 i.e., eight hundred + sixty + two.
Now, we’ll merge the Number names. The Name of the Number is Eight Hundred Sixty-Two.

1. Why is it important to know Number Names for Numbers?

It helps the children how numbers are connected to each other. They understand the Number words and use them in different circumstances.

2. What do Names of the Numbers mean?

Numbers with words are the alphabetical form of numbers in mathematics. With the help of number words, we could make the higher value of the number in words easily.

3. How do you get the Number Name of the highest number?