Mass is the word that we see around us every time. Every object has a mass like a table, a glass, and even air has mass. It is a basic feature property of matter. All objects are light or heavy because of their mass. Mass is used to measure the weight of an object but weight is used to measure how heavy the object is. The terms mass and weight seem the same but there is a small difference between both. On this page, you will learn about mass and its measuring units and few examples of how to measure mass for a better understanding of the concept.

For example, the weight of an object changes, but a mass of a body never changes. To measure mass, we use some metric units. The following image shows some measuring tools to know and make understand the mass of an object. 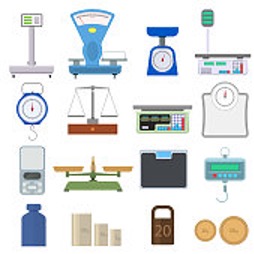 In the metric system of measuring mass, the units we used to measure most are grams and kilograms. Every unit of mass is converted to other units by using the proper formula without affecting the quantity to be measured. There are different terms to calculate or measure the mass namely grams, kilograms, lbs, tonnes, pounds, etc. The standard units of mass are kilograms and it is denoted as ‘kg’. For example, to know the weights of heavy objects like stones, bags of rice, etc.

But, the commonly used units for measuring mass are grams(g), kilograms(kg).

Therefore, the total weight carried by Ram is 16kg 595g.

FAQs on How to Measure Mass?

2. What are the units used to measure mass?

3. Can we measure the mass by scale?

By using scale we can’t measure mass directly, because the weight of any object depends on local gravity. Thus, weights are stated in mass units like grams, kilograms.

4. Why do we measure the mass?

Measuring Mass is important because it measures the amount of force to take while the object moves. Mass is the measurement of the amount of material in an object it contains.