Kindergarten students can find the tracing worksheet that helps them to learn to write the number 10 easily. Parents and teachers who teach numeric numbers to their kids can download the worksheet in the below sections. Kids can learn to trace, color, count, identify and write the number 10. Find the information related to the writing of number 10, identifying number ten in the following sections of this page.

The number 10 represents the number of objects in a box. By learning the numbers, kids can do the math calculations faster and read the telephone number. The number ten is the first two-digit natural number. Students are suggested to trace the number ten and spelling ten carefully to know how to write the number 10 quickly.

Ten is the spelling of the number 10. Students should learn the spellings of numbers from 1 to 10 along with how to write them during their preschooling. You are supposed to trace the ten spelling several times carefully to learn to write the number ten successfully. Get a direct link to download Number Ten Tracing Worksheet pdf for free of cost. Students have to practice writing number ten.

How to Identify Number Ten?

In the below circle, we have provided the different numbers from 5 to 12. Kindergarten students have to find the number 10 out of the numbers included in the circle and color it properly. You can also color the box in the circle which has the number 10. 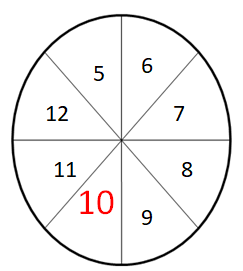