Large numbers are the numbers that we don’t use in our daily routines. Mostly these numbers are frequently used in bank statements or use in the counting of the population. In mathematics, when we compare the two numbers the bigger number is known as a Large Number. Large Numbers are denoted in standard form. In the number system, we write the numbers with the place values.

What are Large Numbers?

Large Numbers are nothing but lakhs, millions, billions, and soon. Normally, these are not used as our regular numbers. These are usually represented in terms of a thousand million or by an exponent form. These millions, billions differ from one number system to another system. To write the six-digit, seven-digit large number need to use commas in two places, one place to separate ONES and THOUSANDS, another place to separate is THOUSANDS and MILLIONS period.

Now, learn how to read and write the large numbers from the below example:

In order to read & write large numbers, first, we have to separate the given number in groups as ONES, THOUSANDS, LAKHS, and soon as given.

Now, take the given number 652385 and divide the ONE’s period by marking a comma after three places from the right

The digits that are formed as one group are read together, as well as the name of the period like ONES, THOUSANDS, and so on.

To write this Large Number six lakhs, fifty-two thousand, three hundred eighty-five, we use the place value chart to represent the digits.

The number in the above place value chart can be written by keeping commas as 6, 52, 385.

We add these places as column by column from right to left side. Starts the addition from one’s place, tens place, and so on.

Let’s see this addition of given numbers

Take the given numbers, keep the numbers on top of each other for subtraction.

Now, place the digits as a column by column from the right side to the left side. This is also known as column subtraction.

We start the column subtraction from one’s place, tens place, and etc.

Let’s look at the subtraction of given Large Numbers.

Therefore, the subtraction of given Large Numbers is 11, 360.

Write the given numbers on top of each other, and line up the numbers.

Now, we take one’s place digit of the bottom number and multiply it with the top number, then you get one answer.

And, then take the tens place digit of the bottom number and multiply it with the top number, and now, you have to write the answer in tens place in the next line of the above result.

Next, we should add both answers to get the multiplication of the given Large Numbers.

The Multiplication of Large Numbers is as follows: 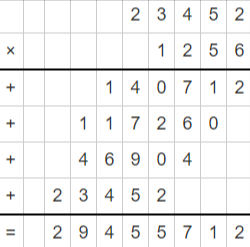