I Can select and use nonstandard units to measure lengths, weights, and liquid volumes.

Choose an object in your classroom. How would you describe the size of the object to a classmate? 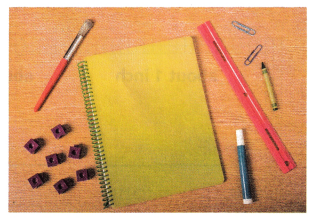 Turn and Talk How could you describe the length of your object in terms of another object’s length?
Answer:

Question 1.
Think about the measurements you see on a yardstick. Find objects in your classroom that have a length of about 1 inch, about 1 foot, and about 1 yard. Record your observations.

B. If you have walked 20 minutes1 then you have likely walked about a mile. What benchmark could you use for 1 mile?
Connect to Vocabulary
A mile (mi) is a customary unit for measuring length. Liquid volume is the measure of the space a liquid occupies. Some customary units for measuring liquid volume are gallons (gal), quarts (qt), pints (pt), and cups (c).
Answer:
The time taken to go from my home to school is 20 minutes by walk which can be used as benchmark for 1 mile.

Question 2.
Consider the objects shown and the liquid volume they can hold. Find at least one object in your classroom that would hold about 1 cup, 1 pint, 1 quart, and 1 gallon of liquid. Record your observations.

Question 3.
Consider the objects shown and their weights. Find at least one object in your classroom that would weigh about 1 ounce, 1 pound, or 1 ton. Record your observations.
Connect to Vocabulary
Weight is the heaviness of an object. Some customary units for measuring weight are ounces (oz), pounds (Ib), and tons (T).

B. What animal do you think weighs about 1 ton?
Answer:
A lion will weigh about 1 ton.

Use benchmarks to choose which unit would be best to measure each.

Question 6.
Which image represents a possible benchmark for a foot? Circle the answer.

A car length would be around 3 to 5 feet.

Attend to Precision Use benchmarks for length to choose the customary unit you would use to measure each.

Is anything getting in my way of learning customary benchmarks? If so, what is it?
Answer: