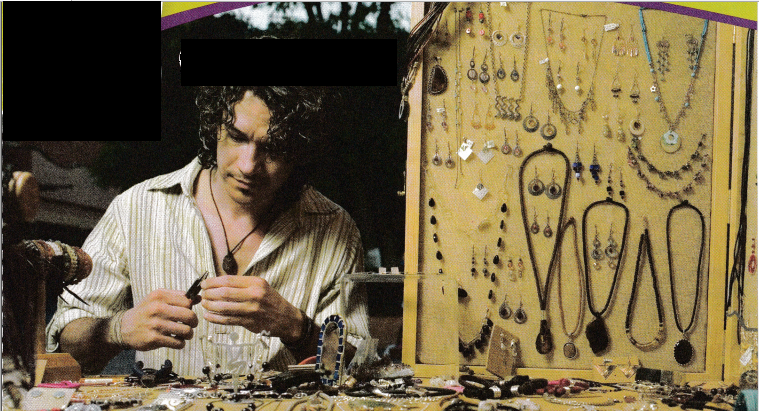 Jewelry designers often use different metals and stones to design works of art that people wear. Jewelry designers have to understand math and science as well as art so that they know what materials to use and how to use them.

Did you know that 100,000 years ago people used items from nature like seashells and bones to decorate themselves? Then much later, Egyptians began making jewellery using bits of gold that they hammered together. They often used the scarab beetle in their designs and added colourful stones. Egyptians also made glass beads.

STEM Task:
Jewellery designers often make a pattern for a piece of jewellery using geometric shapes such as triangles or rhombuses. Design two shapes for your jewellery using different methods. You can trace pattern blocks or tiles on an index card and cut them out. You can also fold the index card in half and cut out a shape along the fold line. Then draw shapes to represent stones on your cutouts and colour them. Tape your stone into a strip of paper to make a bracelet.

Which strategy worked best when you were designing your jewellery?
Answer:
The designs I created are meant to be functional and beautiful. And moreover, I think it’s important to have a unique style that stands out. In this digital era, people are introducing different types of strategies to design jewellery which makes it competitive with others. If we make our jewellery is made of metals which can be recycled that’s very useful also. This work has been featured in the media and on the internet means it will be like marketing. This will improve our work more and there might be a chance of getting new ideas to design jewellery. Thinking creative and out of the box will get the best ideas to work and design fabulous jewellery.

What did you learn from this activity that you can apply to other situations?
Answer:
– That the things e create can be beautiful and useful.
– That there is beauty in all things.
– concentration levels were also increasing because when we are doing something which is interesting this makes us learn more things about the activity which we are doing.
– Our thinking levels will be different so that our actions can make a difference.
– That we can always learn new things.

Which group does not belong? 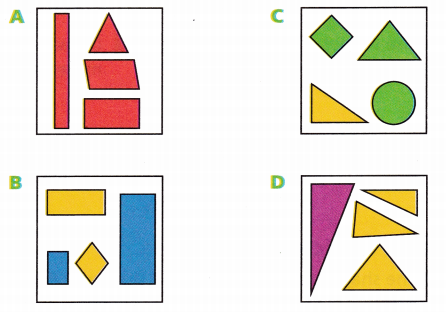 How is the group that does not belong different from the other groups?
Answer:

Option C does not belong to the group because in option C all shapes are polygons except one. The circle is not a polygon.
According to the polygon definition, polygons are plane figures with at least three straight sides and angles. A polygon does not have any curved surface. So option C is different.

What could you change in that group so all the shapes share an attribute?
Answer: If we draw any straight line shapes having at least three sides so that all shapes share an attribute. There is a chance of drawing any polygon shape like hexagon, pentagon, quadrilateral, anything of our choice but the shape should belong to the group. Now all the options belong to the same group because in the place of the circle I had drawn a pentagon.

Complete these problems to review prior concepts and skills you will need for this module.

Attributes of Shapes
Write the name of the shape.

Answer: Hexagon
Explanation:
A regular hexagon is a closed shape polygon that has six equal sides and six equal angles.
Hexagon properties:
– It has 6 equal sides and 6 equal angles.
– It has 6 vertices.
– The Sum of interior angles equals 720°.
– The Interior angle is 120° and the exterior angle is 60°.
– It is made up of six equilateral triangles.
– 9 diagonals can be drawn inside a regular hexagon.
– All the sides opposite to each other are parallel.

Question 4.
Circle the shapes with fewer than 5 sides.

Question 5.
Draw two shapes that have more than 3 sides.
Answer: We can draw a square, rectangle, rhombus, pentagon, hexagon etc.
These all shapes are having more than 3 sides.
Square: A square is a quadrilateral with four equal sides. There are many objects around us that are in the shape of a square. Each square shape is identified by its equal sides and its interior angles that are equal to 90°. And they are parallel to each other.
Rectangle: A rectangle is a two-dimensional plane figure with four sides. A rectangle is a four-sided polygon in which the opposite sides are parallel and equal to each other. The rectangle is a special type of parallelogram with all its angles equal. A rectangle with four equal sides is known as a square.
Rhombus: A rhombus is a special case of a parallelogram, and it is a four-sided quadrilateral. In a rhombus, opposite sides are parallel and the opposite angles are equal. Moreover, all the sides of a rhombus are equal in length, and the diagonals bisect each other at right angles
Pentagon: A pentagon is one of the many types of a polygon having five sides and five angles. In a pentagon, all the sides meet with each other, that too, from end to end to form its shape. Hence, the number of pentagon sides is equal to five.
Hexagon: A hexagon can be defined as a polygon with six sides. The two-dimensional shape has 6 sides, 6 vertices and 6 angles.

Question 6.
Circle the shapes that have exactly 4 sides and 4 vertices.

Explanation:
– Count the number of sides and vertices then we can easily identify.
– Trapezium, rectangle, rhombus, parallelogram are having four sides. These four shapes are quadrilaterals too.