Know the fundamental concepts of Geometry here. We are providing detailed information regarding point, plane, ray, line segment, incidence properties of lines in a plane, collinear points, concurrent lines, two lines in a plane, etc. Follow the important points and basics of geometry. Go through the below sections to know the formulas, examples of all the basic geometry concepts.

The term “Geometry” is derived from the Greek word “Geometron” where Geo means “Earth” and Metron means “Measurement”. Geometrical ideas are basically reflected in various forms of engineering, architecture, art, measurements, etc. Different objects have different shapes where the ball is round in shape and the ruler is straight. Know some of the interesting facts that enable us to learn more about shapes around us.

Point is considered as the fundamental object in euclidean geometry. It determines the location which has no length, breadth, and thickness. The small dot marked by pencil or pen on a paper or sheet made by a fine needle is few examples of a point. It is represented with (.). Every point has to be denoted with a name and we have to use a single capital letter for it. Representation of points of A, B and M are as follow:

The basic concept of a line is its straightness which can indefinitely extend in both ways or directions. The 2 arrowheads placed in opposite directions indicate that the line length is unlimited. The line has only length but not thickness or breadth which has no endpoints. Lines are made up of an infinite number of points. Lines also must have names as the points do, therefore we can refer to them easily. Lines are represented with (↔). If a line is passing through the points A and B, then it is denoted with line notation of AB ↔ and graphically represented as:

Planes are nothing but flat surfaces. The plane has length and breadth but not thickness. The basic concept of the plane is its flatness and it extends in all directions indefinitely. The length and breadth of the plane are always unlimited and are two-dimensional. The plane is made up of an infinite amount of lines and two-dimensional figures are called plane figures. All the lines and points which lie on the same plane are known as coplanar. Plane in graphical representation is represented as:

The line segment will be drawn as part of the line.

The line of unlimited length and one end is called the ray. The unlimited number of rays can be drawn with the initial point. If there are two rays with similar initial point and extending in opposite direction are called as opposite rays. Two rays are said to be in parallel if and only if the lines between them are parallel. The ray that is starting from A and passing through B is denoted by AB→

The angle is a combination of both rays with the common endpoint. The angle is represented with the symbol “⌊”. The point of the corner at an angle is called the vertex. The angle contains two straight sides which are called the arms of the angle. 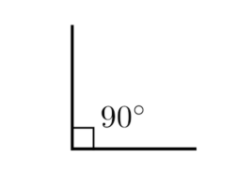 How to Measure Angles?

The angle consists of 2 rays with the common endpoint. Both rays are known as the sides of the angle and the common endpoint is the angle vertex. For each angle that is rotated about the vertex will have a measure which is determined by terminal side rotation about the initial side. If it is rotated counterclockwise, it generates the positive angle measure and a clockwise rotation generates the negative angle measure.

Two or more points that lie on the same line in the plane are known as collinear points.

In the above diagram,

Points A, B, and C are the points collinear lying on a line.

Incidence Properties of a Line in a Plane

Two clear points in the plane will determine the unique line. Only one line can be drawn to pass through the given points and the line lies in the plane completely.

An infinite number of points will lie on a similar plane.

Two lines in the plane will either intersect or are parallel to each other.

Three or more lines that pass through the same point are known as concurrent lines and the common point of the line is called the point of concurrency.

In the above figure p, q, r, s, t, u meet and intersect at the point O which are called concurrent lines.

The (OAT) Opposite Angle Theorem
The opposite angles are equal, if two straight lines cross