In mathematics, the function is a relationship between a set of inputs where each input is related to exactly one output. Like relations function also have domain, codomain, and range. Mapping is the relationship that exists between input and output in an arrow diagram. Students can refer to the further sections of this page to understand the functions and mapping concept easily and clearly. Also, have a look at the solved questions on functions or mapping and understand the concept well.

A function is a special kind of relationship between the inputs (domain) and their outputs (codomain) where each input has exactly one output. Abd output can be traced back to its input. every function has a domain, range, and codomain. In general, a function is denoted by f(x), where x is the input. The representation of a function is y = f(x), where y is the output. The different types of functions are one to one function, many to one function.

As function is a special type of relation where each element of the domain is paired with another element in the range. This pairing is called mapping. A mapping diagram can be used to represent the relation between domain and codomain values.

The mapping diagram is similar to the flow chart for a function showing the input and output values. Let us learn about one to one relation and one to many relations in the following sections. 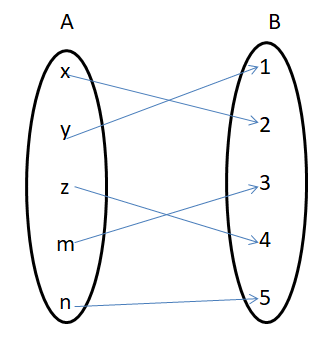 In general, a mapping diagram has two circles namely domain and range. Lines are drawn from the domain of the function to range to represent a relation between two elements in the diagram. In the above image, each element of the range is paired with exactly one element of the domain called one-to-one mapping.

Many to one Mapping 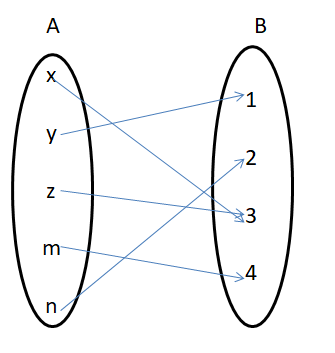 In the above mapping diagram, 3rd element of the range is in relation to more than one element in the domain. So it is called many to one mapping.

One to Many Mapping 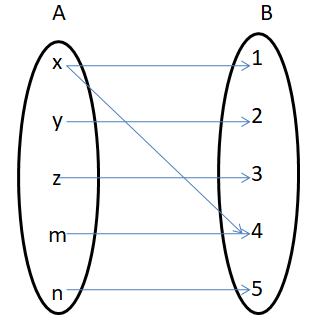 Function as a Special Kind of Relation

Let us take A and B are two non-empty sets, then the rule f that associates each element of A with different elements of B is called a function or mapping from A to B i.e f: A → B.

FAQs on Functions or Mapping

1. What is the difference between mapping and function?

A function is a special kind of relation where every element of the domain is paired with exactly one element in the range. Mapping means how the elements are paired in a function.

2. Is every function a mapping?

Yes, every function is mapping. Actually, there is no such difference between a function and a mapping. If X and Y two non-empty sets, then “f” is a function or mapping from X to Y.

3. What are mapping functions?

The mapping function is defined as a different method of transforming a three-dimensional point of intersection to a two-dimensional u-v pair termed texturing coordinates. There are used to apply two-dimensional textures to surfaces.

4. What are the 4 types of functions?