Finding a Number is Prime or not in the case of smaller numbers is quite easy. But when it comes to larger numbers it can be a bit tricky. Don’t worry as this article covers the information on how to find if a number is prime or not for both smaller and larger numbers. Refer to the different methods used for finding prime numbers such as factorization, shortcut methods, etc. Also, find a few solved examples to evaluate if a given number is prime or not explained clearly.

Simple and Easy Methods on How to Find Prime Numbers?

How to find if a Large Number is Prime or Not?

Note: If a large number has 5 at the end then it is not a prime number as the numbers ending with 5 are always divisible by 5.

Here is the Shortcut Trick to find Prime Numbers ranging from 1 to 100. Follow the guidelines provided below to find out Prime Numbers easily. They are as below

After performing all these steps the numbers available without striking off are all prime numbers. Have a quick glance at the image below to know the prime numbers. 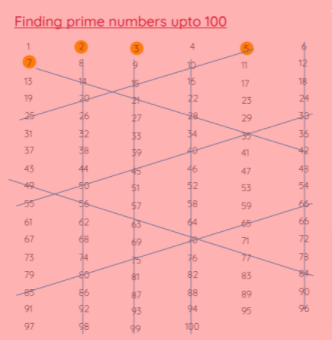