Family Note
Children love to sort! At school, children sorted blocks by shape and compared the number of blocks in each group. Encourage your child to think of different ways that objects at home can be sorted, such as by color, size, shape, or function. For this activity, help your child find a collection for sorting, such as toy animals or cars, rocks, shells, writing or drawing tools, mixed-shape or mixed-color cereal or pasta, or other items. After sorting, encourage your child to count and to compare the number of items in each group.

Question 1.
Gather a collection of objects.
Sort your objects. (You can sort by, color, size, shape, or another way that is interesting to you.)
When you have finished sorting, count how many objects you have in each group.

Answer:
Here different shapes, Colors and Size of Triangles , Squares and Circles are represented in the below figure 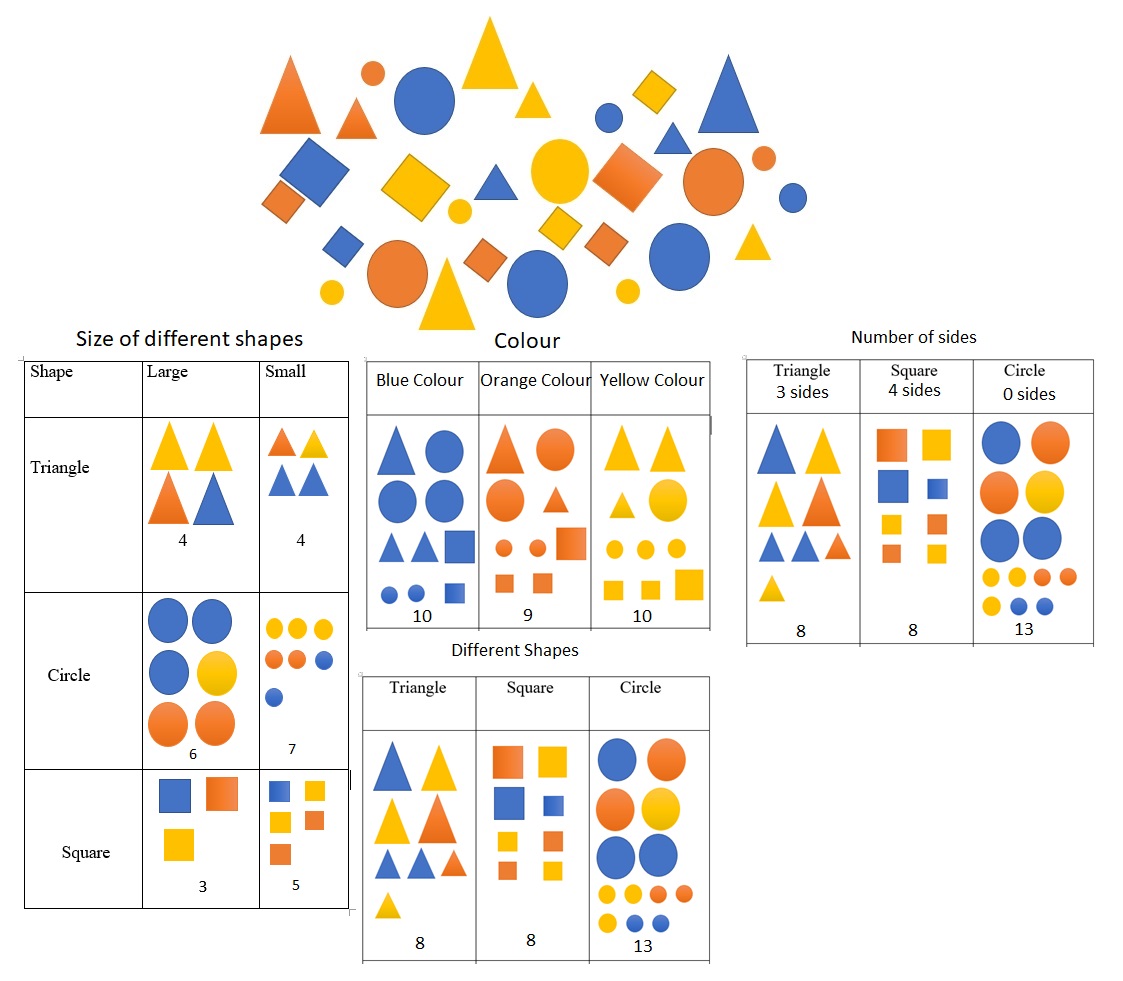 Question 1.
Gently toss 10 pennies. Sort the pennies into groups of “heads” and “tails” and put them on the ten frame.
Count the number of heads and the number of tails. You may want to record the numbers you find on the back of this page.
Repeat at least three more times. 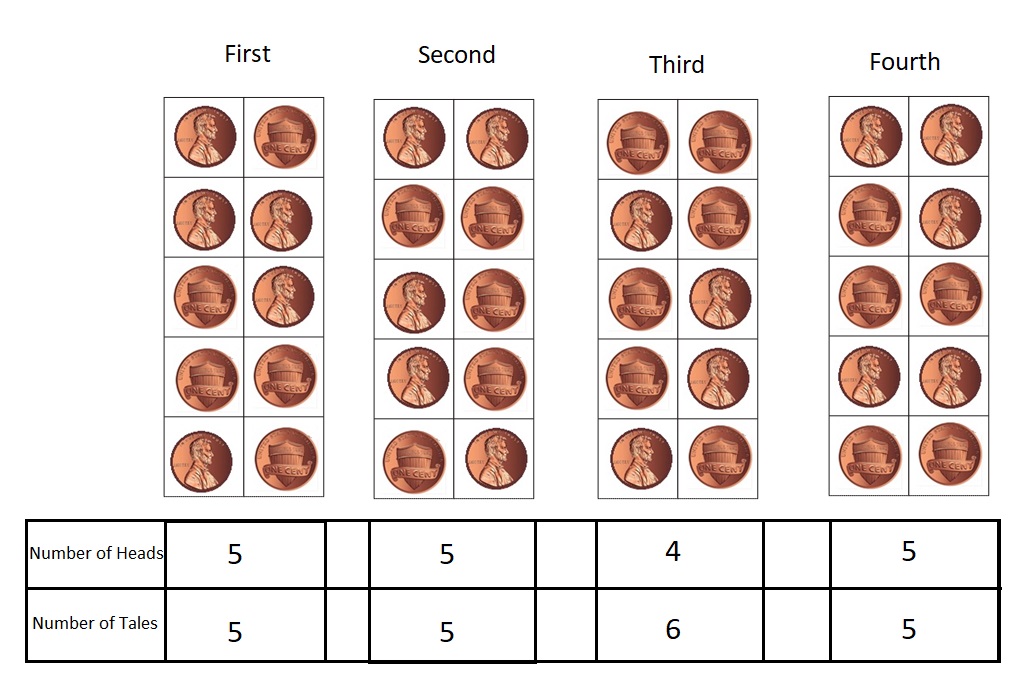 Explanation :
4 times the 10 pennies were tossed and the respective head and tale is written in the given tabular column. then total number of heads and total number of tales are tossed are counted and written below as shown in the above Figure .

Family Note
Your child is learning about length measurement by comparing objects and describing them as longer and shorter than other objects. In Kindergarten we focus on direct comparisons of length to prepare children to use measuring tools later. Help your child line up the end of his or her arm (at the longest finger) with the end of the object being compared. This technique will be helpful later when your child learns to line up objects with the end of a ruler or other measuring tool.

Family Note
In school, children are practicing using positional language to describe objects in the environment. Playing Simon Says helps your child learn the meaning of these words by providing opportunities to follow and use positional commands.

Question 1.
Play Simon Says with your family. Use positional words such as above, below, next to, in front of, and behind. Take turns being “Simon” (the leader).
Use clues such as these: 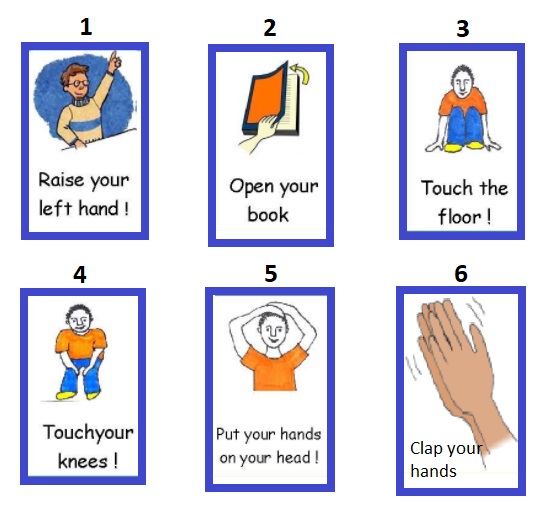 Family Note
At school, your child has been practicing writing the numbers 0–10 to represent sets of objects. Encourage your child to use this new skill by counting items at home and writing numbers to represent his or her findings.

Question 1.
How many of the following things are in your home? Count and write the numbers. 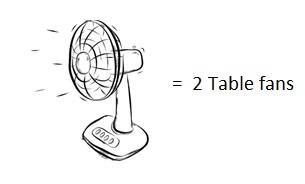 Explanation :
All the respective objects in my home are counted and written .

Family Note
Our class has been learning about the numbers 1–10 and about why their order matters. Connecting numbers to sets and seeing how each number is exactly one more than the number before helps children build important foundations for later arithmetic skills.

Question 1.
Take 1 stuffed animal (or building block or other toy). Cut out the number 1 from a magazine or newspaper or write “1” on a piece of paper. Place the number in front of the toy.

Place a second toy next to the first one. Cut out or write the number that should go in front of the second toy.

Continue until you have a line of 10 toys. Each toy should be labeled with the correct number. Count the toys to check.

Explanation :
10 Animals are placed side by side and a piece of paper is placed infront of them and Numbers from 1 to 10 are written in an order as shown in above figure .

Family Note
Our class has been learning about numbers and the quantities they represent. Playing games is a fun and effective way to learn about numbers. Many games can be played using a deck of cards. In addition to the games below, your child may also think of other games to play with the cards.

Question 1.
Remove the face cards from a deck of playing cards. Keep the aces and use them to represent the number 1. Use the cards (or your number cards from school) to play these games with a family member or friend. 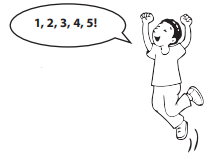 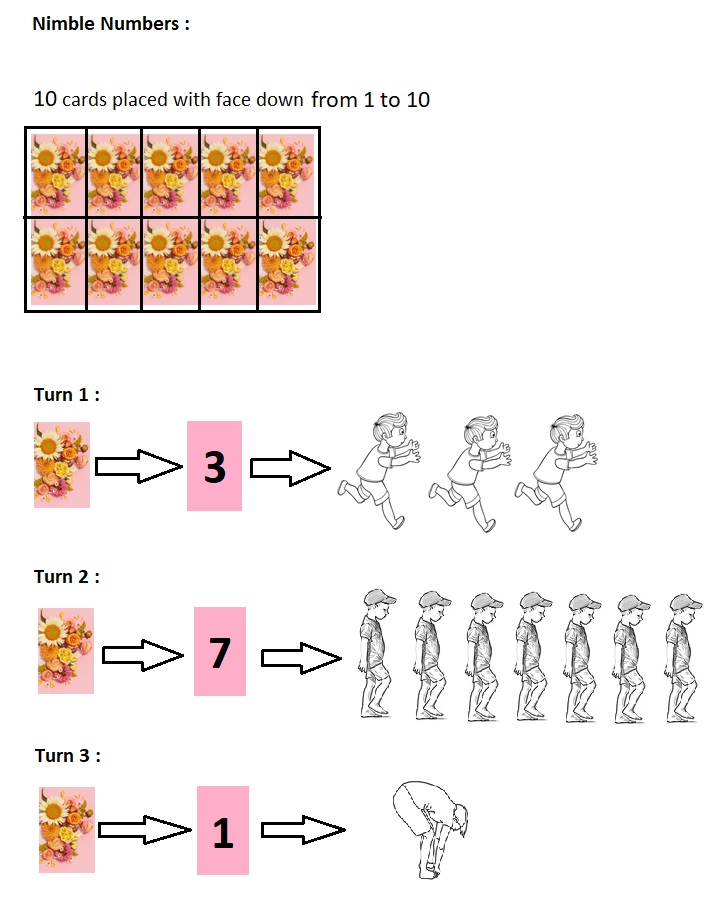 Explanation :
Myself , My Dad and My Brother are playing the game placing the cards from 1 – 10 with Stop watch and checking the Time who does it first and the time limit .
My dad completed playing all the cards in order in 30 seconds and I could complete placing only 8 cards and My brother could place only 7 cards as shown in the above Figure .

Family Note
Monster Squeeze is a game that reinforces number recognition and the concepts of greater and less.
Directions are provided below, but let your child take the lead in teaching you the game.
Materials Two monsters and a 1–10 number line
Players 2
Object To guess the mystery number
Directions

Question 1.
Cut out the monsters and the number line. Use them to teach someone to play Monster Squeeze. 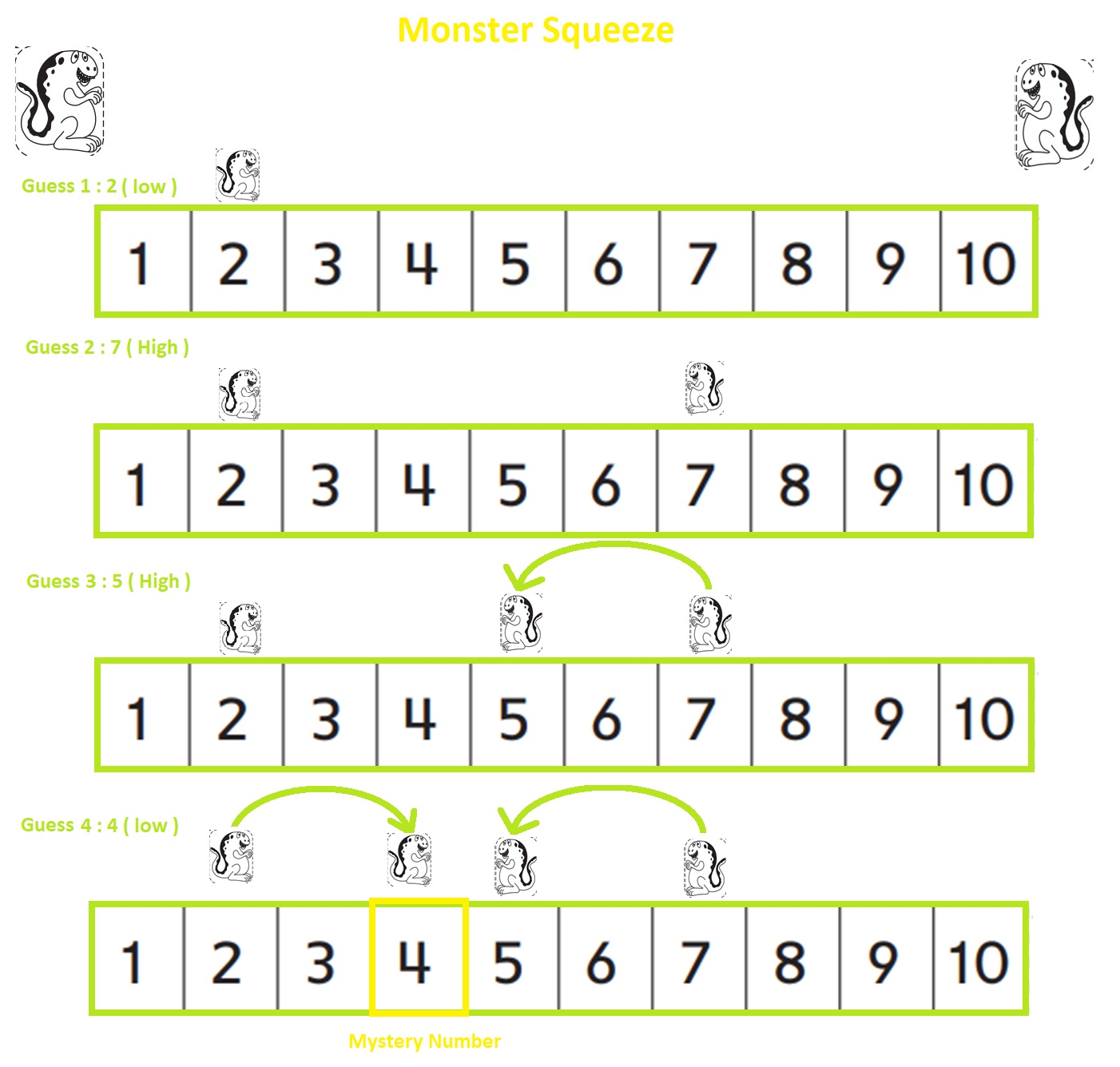