Question 1.
In the game of tennis, one player serves to a second player to start a point. If the server misses landing the first serve (the ball is hit out of bounds and cannot be played), the server is allowed a second serve. Suppose a particular tennis player, Chris, has a 0.62 probability of a first serve landing in bounds and a 0.80 probability of a second serve landing in bounds. Once a serve has landed in bounds, the players take turns hitting the ball back and forth until one player hits the ball out of bounds or into the net. The player who hits the ball out or into the net loses the point, and the other player wins the point. For Chris, when the first serve lands in bounds, he has a 75% chance of winning the point; however, he has only a 22% chance of winning the point on his second serve.

a. Calculate the probability that Chris lands his first serve in bounds and then goes on to win the point for a randomly selected point.
Answer:
P(first serve in )P (wins point│first serve in) = 0.62 (0.75 ) = 0.465

Question 2.
In Australia, there are approximately 100 species of venomous snakes, but only about 12 have a deadly bite. Suppose a zoo randomly selects one snake from each of five different species to show visitors. What is the probability that exactly one of the five snakes shown is deadly?
Answer:
\(\frac{C(12,1) C(88,4)}{C(100,5)}\) ≈ 0.372

Question 3.
In California (CA), standard license plates are currently of the form 1 number–3 letters–3 numbers. Assume the numbers are 0—9 and the letters are A–Z.

c. For part (b), did you use permutations or combinations to carry out the calculation? Explain how you know.
Answer:
I used permutation because order matters.

Question 4.
When there is a problem with a computer program, many people call a technical support center for help. Several people may call at once, so the center needs to be able to have several telephone lines available at the same time. Suppose we want to consider a random variable that is the number of telephone lines in use by the technical support center of a software manufacturer at a particular time of day. Suppose that the probability distribution of this random variable is given by the following table:

a. Produce a graph of the probability distribution for this random variable, including all relevant labels.
Answer: 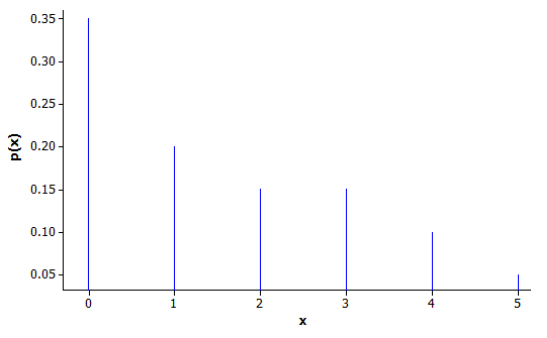 c. Explain how to interpret this expected value in context.
Answer:
If we were to observe the number of phone lines in use over a very large number of days, the average number of lines in use will approach “1.6” in the long run.

Question 5.
The following table lists the number of U.S. households (in thousands) with 0 vehicles, 1 vehicle, 2 vehicles, or 3 or more vehicles for all households responding to the 2009 National Household Travel Survey.

a. Use these data to create a table of relative frequencies that could be used as estimates of the probability distribution of the number of vehicles for a randomly selected U.S. household (that responded to the survey).

d. Now, reconsider the last category. Suppose we were to find the information for the actual number of vehicles for these households. Would the expected number of vehicles per household with this new information be larger or smaller than the expected value you found in (c)? Explain your reasoning.
Answer:
This would give us a larger expected value because we would decrease the probability of multiplying “3” vehicles and then add in larger numbers of vehicles.