Exercises 1–3: Credit Cards
Credit bureau data from a random sample of adults indicating the number of credit cards is summarized in the table below.
Table 1: Number of Credit Cards Carried by Adults 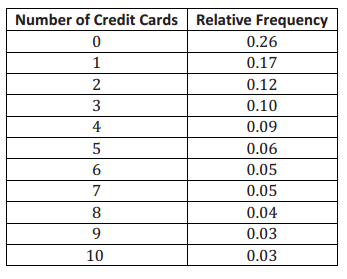 Exercise 1.
Consider the chance experiment of selecting an adult at random from the sample. The number of credit cards is a discrete random variable. The table above sets up the probability distribution of this variable as a relative frequency. Make a histogram of the probability distribution of the number of credit cards per person based on the relative frequencies.
Answer: 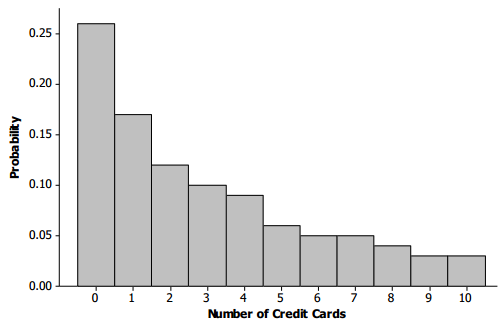 Exercise 3.
Suppose you asked each person in a random sample of 500 people how many credit cards he or she has. Would the following surprise you? Explain why or why not in each case.
a. Everyone in the sample owned at least one credit card.
Answer:
This would be surprising because 26% of adults do not own a credit card. It would be unlikely that in our sample of 500, no one had zero credit cards.

Exercises 4–7: Male and Female Pups
Exercise 4.
The probability that certain animals will give birth to a male or a female is generally estimated to be equal, or approximately 0.50. This estimate, however, is not always the case. Data are used to estimate the probability that the offspring of certain animals will be a male or a female. Scientists are particularly interested about the probability that an offspring will be a male or a female for animals that are at a high risk of survival. In a certain species of seals, two females are born for every male. The typical litter size for this species of seals is six pups.
a. What are some statistical questions you might want to consider about these seals?
Answer:
Statistical questions to consider include the number of females and males in a typical litter, or the total number of males or females over time. (The question about the number of males in a typical litter will be explored in the exercises.)

Exercise 5.
The probability distribution for the number of males in a litter of six pups is given below.
Table 2: Probability Distribution of Number of Male Pups per Litter* 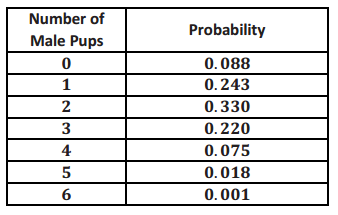 *The sum of the probabilities in the table is not equal to 1 due to rounding.
Use the probability distribution to answer the following questions.
a. How many male pups will typically be in a litter?
Answer:
The most common will be two males and four females in a litter, but it would also be likely to have one to three male pups in a litter.

Exercise 6.
Based on the probability distribution of the number of male pups in a litter of six given above, indicate whether you would be surprised in each of the situations. Explain why or why not.
a. In every one of a female’s five litters of pups, there were fewer males than females.
Answer:
Responses will vary.
0.33 + 0.243 + 0.088 = 0.621
This seems like it would not be surprising because in each litter, the chance of having more females than males is 0.621. The probability that this would happen in five consecutive litters would be (0.621)5, which is much smaller than 0.09, but still unlikely.

c. A female had two litters of pups that were all males.
Answer:
Responses will vary.
This would be surprising because the chance of having all males is 0.001, and to have two litters with all males would be unusual (0.000 001).

d. In a certain region of the world, scientists found that in 100 litters born to different females, 25 of them had four male pups.
Answer:
Responses will vary.
This would be surprising because it shows a shift to about \(\frac{1}{4}\) of the litters having four males, which is quite a bit larger than the probability of 0.075 given by the distribution for four males per litter where the probability of a male is \(\frac{1}{3}\).

Question 1.
Which of the following could be graphs of a probability distribution? Explain your reasoning in each case. 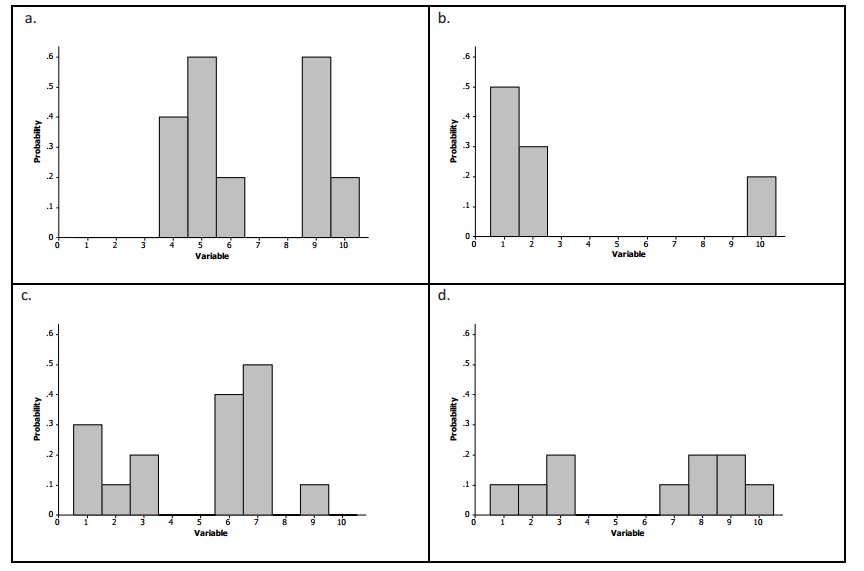 Question 2.
Consider randomly selecting a student from New York City schools and recording the value of the random variable number of languages in which the student can carry on a conversation. A random sample of 1,000 students produced the following data.
Table 3: Number of Languages Spoken by Random Sample of Students in New York City

a. Create a probability distribution of the relative frequencies of the number of languages students can use to carry on a conversation.
Answer:
Table 4: Number of Languages Spoken by Random Sample of Students in New York City

b. If you took a random sample of 650 students, would it be likely that 350 of them only spoke one language? Why or why not?
Answer:
About 54% of all the students speak only one language; 350/650 is about 54%, so it seems likely to have 350 students in the sample who could carry on a conversation in only one language.

c. If you took a random sample of 650 students, would you be surprised if 100 of them spoke exactly 3 languages? Why or why not?
Answer:
\(\frac{100}{650}\) is about 15%. The data suggest that only about 7% of all students speak exactly 3 languages. This could happen but does not seem too likely.

Question 3.
Suppose someone created a special six-sided die. The probability distribution for the number of spots on the top face when the die is rolled is given in the table.
Table 5: Probability Distribution of the Top Face When Rolling a Die

a. If x is an integer, what does x have to be in order for this to be a valid probability distribution?
Answer:
The probabilities have to add to 1, so we need 6-3x + 3x = 6. However, this is true for any value of x. Since the probabilities also have to be greater than or equal to 0, x can only be 1 or 0.

Question 4.
The graph shows the relative frequencies of the number of pets for households in a particular community. 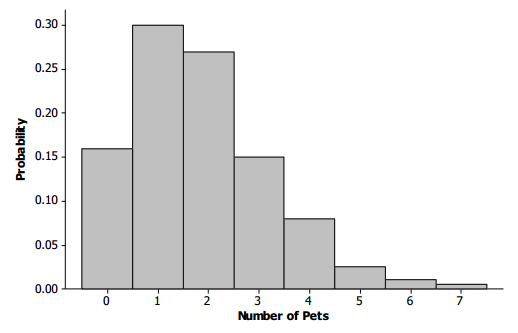 a. If a household in the community is selected at random, what is the probability that a household would have at least 1 pet?
Answer:
0.84

c. Suppose the results of a survey of 350 households in a section of a city found 175 of them did not have any pets. What comments might you make?
Answer:
Responses will vary.
Based on this probability distribution, there should be about 16% or 56 of the 350 households without pets. To have 175 houses without pets suggests that there is something different; perhaps the survey was not random, and it included areas where pets were not allowed.